From 2009 and 2010, the office of District Attorney for Paragon City had been rocked by a series of sudden resignations. Several experienced top prosecutors were either promoted or hired from other cities to fill the position, and each would resign in a span of a few weeks, or, in one instance, within a week. This caused a political and public relations crisis in City Hall, one that culminated with the decision to hold an election to fill the vacant position.

As mentioned in Issue #14 of the "Guardians of the Dawn Spotlight" series, the office of District Attorney had been filled and vacated at least five times within a six-month time period. It is implied by Deputy District Attorney Edward Vance in a private thought that the vacancies were all engineered by Shadowborn to give him greater control over city affairs without having him actually promoted to the position.

Since the administrative responsibilities of the office were split among the various Deputy District Attorneys, there was no pressing need to fill the position. City officials attempted to fill the position through internal and external candidates, but either no candidate stood out, or else they would unexpectedly withdraw their candidacy.

The decision was then made by City Hall to temporarily change the description of the position of District Attorney and make it an election position. The only pertinent qualifications were that the candidate be a resident of Paragon City, a qualified attorney in good standing, and pass the Rhode Island Bar Exam.

Edward “The Trust” Vance – Currently serving as Deputy District Attorney for Paragon City. He is known for his aggressive stance on crime and in getting convictions.

Alexander Wentworth – Currently managing partner for Architect Entertainment and fellow with the Paragon Libertarian Society. Despite his early years as a “celebutant”, his time in the Zig for a crime that he did not commit changed his life. He since rebuilt his name and reputation and has been a strong advocate for libertarian ideals.

Conrad Bochco – former Paragon City Police Chief. Nominated as a conservative candidate and as someone with experience in getting things done. He is best known for rebuilding the police department after the 2002 Rikti Invasion and restoring order quickly.

Alice Banks – A former federal prosecutor, Mrs. Banks is now a stay-at-home mother and attorney who felt compelled to enter the race on behalf of the children and families of Paragon City. She has also endorsed the controversial “No to Sidekicks” campaign to outlaw sidekicks.

Noble Son – A crusading superhero and practicing attorney. He has only been in Paragon City for slightly less than a year, but firmly believes that he can be a force for good even working for Paragon City.

With a minimal amount of time until the election, most of the campaigning was done through various special interest groups that endorsed the candidates. 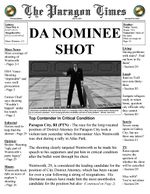 On July 31st, an assasin attempted to kill Alex Wentworth while he was giving a campaign speech in Atlas Plaza next to City Hall. Kheldian hero Daybright was alerted to the shooter, but was not able to arrive to prevent the shot being fired. Her arrival, though caused Alex to turn at just right time for the bullet to miss his heart.

The shooting was seen on PNN as the campaign speech was being covered live. Alex was rushed to Chiron Memorial Hospital, where he was in guarded condition.

Various heroes, including members of the Guardians of the Dawn, Justice-Knights, and Vindicators, as well as members of the Freedom Corps, scoured the city looking for the shooter, who was dubbed by Daybright as "Agent Blue". There were no signs of her.

Alex was released from the hospital prior to the debate, but was understandably not able to attend it. Still, the outrage over the assassination attempt generated tremendous public support for him.

Role of the Media

Despite a company policy prohibiting PNN media personalities from showing favorites, controversial personality Garry Becker was very overt in his support for DDA Vance. His support of the Deputy District Attorney can be traced back to his role in the "Agent Burke" incident, and Becker had long pushed on the air to have Vance be named District Attorney before the decision was made to have a special election.

While there were calls to have Becker "tone down" his on-air support of Vance, Becker continued to remind the executives at PNN about his contract, which gave him editorial control over his own material as long as it did not engage in slander or profanity.

Other PNN personalities either stayed out of the matter or else kept their support to themselves.

Two days before the special election, Garry Becker issued an on-air ultimatum to his viewers. So convinced that Vance would win, one way or another, he threatened to quit his job on PNN if voters ended up electing Alex Wentworth, whom he believed was far from qualified to serve as District Attorney. 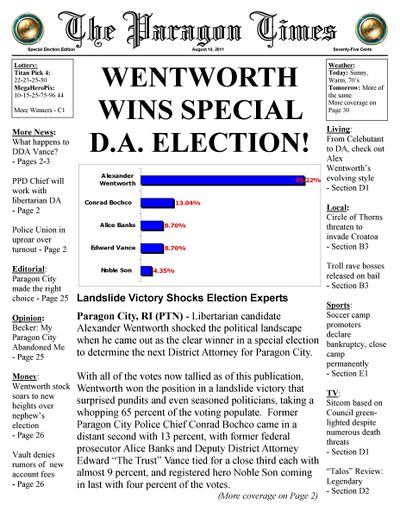 Only forty percent of the registered voters in Paragon City took part in the special election. That was slightly more than average for a non-Presidential election for the city.

Despite fears of ballot stuffing and vote miscounts, the election results were checked and verified by Citadel and Positron of the Freedom Phalanx.

The election of Alex Wentworth came as a shock to election experts, especially given the overwhelming margin of victory he was given. Many expressed surprise that voters would turn away from established names like Bochco and Vance, or from experienced prosecutors like Banks.

The majority of voters that spoke with exit pollsters expressed frustration at the District Attorney's Office for flagrant abuses of power as the reason why they voted for Alex Wentworth. Some took note of the systematic prison outbreaks in the Zigursky Penitentiary and the failure to conduct a formal investigation into them as a reason for change. Still others cited the number of wrongful arrests and convictions made by Vance and the others as their reasons to vote for someone different.

In his concession speech, Vance said that he did not know whether he would still have a job after the election, but that he would be willing to work with his new boss to improve on the reputation of the office of District Attorney. Many in the media firmly believed that Vance would either be fired or would turn in his resignation within twenty-four hours of the results.

In her concession speech, Alice Banks said that while she was not happy with either the turnout or the results, she was content that there were still voters that supported her cause. She also promised that this would not be the last time Paragon City would ever see or hear from her, and that this was just the start of her renewed crusade to "protect the children".

Former Chief Bochco refused to give a "concession speech", because he believed the calling wasn't a "political" position and he didn't want to behave like a "typical politician". He simply wished the new District Attorney well and hoped that his supporters would do the same.

Noble Son told the Paragon Times that he wished the new District Attorney well and that he hoped he could work with the office for some future projects.

Alex Wentworth was sworn in as District Attorney twenty-four hours after the votes were confirmed.

The Paragon Police Union tried to stage a "blue flu" to protest the election results. Unfortunately for them the effect of the "sick-out" was negated by the sheer volume of active heroes in the city.

Contrary to expectations, Vance was not fired from his position a Deputy District Attorney. The new District Attorney believes that Vance's experience as a prosecutor could still be put to use, albeit heavily controlled. Wentworth has also ordered a complete audit of Vance's cases.

The frequent and systematic breakouts at the prison came to an end after Wentworth announced a full investigation of the prison staff and their possible connection to Arachnos.

Wentworth ordered a new liaison position be created to coordinate between his office and the Federal Bureau for Super-powered Affairs to ensure that registered heroes comply with the requirements for evidence and make court appearances as required under city law. That position was filled by Faith Karl.

Noble Son was hired by Wentworth and serves as a junior prosecutor.

Banks resumed her "crusade" to stop sidekicks, targeting the now-"disbanded" Guardians of the Dawn for their underage member, Pyrogurl. When the new DA rejected her help, she invoked a little-known clause in the city's charter to call for the Citizen Grand Jury, which bypassed the DA's office, and appointed herself as special prosecutor.

The results of the election came from an actual online ballot posted on the Guardians of the Dawn website from July 17th until October 24th. Announcements of the election were posted in the City of Heroes forum, Facebook pages, and deviantART.