He is also known as Widowmaker, and he was the first-ever male member of the Arachnos Widow unit until he left the organization to become a freelance operative.

John Cole was raised on Mercy Island. Her mother was a single woman with a history that was considered a secret, which was somewhat normal on Mercy Island given the number of former pirates and arms merchants there. One of his childhood friends was Crystal Burke, whom he later developed his first crush on.

Growing up on Mercy Island was tough for children, but John somehow managed to succeed. He retained a sense of duty and optimism that seemed almost unnatural. It was this kind of character that would later make him an ideal candidate for a revolutionary program for the ruling Arachnos organization.

Early in his Arachnos training, John often worked with Crystal, who at the time was also with Arachnos for the Fateweavers. He had no idea at the time that she was really working on behalf of the mystical organization known as Legacy Chain. In fact, her eventual disappearance encouraged him to take part in a new program for Arachnos.

John was asked to take part in the Widow program, a special branch of Arachnos agents that, until that point, was reserved only for women. John would become the first male Widow in the organization as a test to see if other men could follow suit. Trained by a student of the legendary Red Widow herself, John Cole was given the codename Widowmaker. He also began to exhibit new abilities that were not a part of the Widow program.

As Widowmaker, John was calculated and precise. He only killed when needed to, without boasting or exaggeration. In fact some might say that he regretted killing. That did not make for a good "Agent of Arachnos". 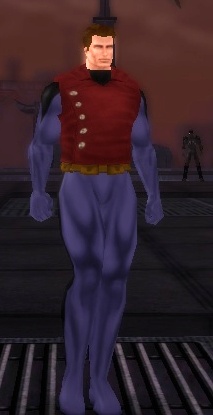 John Cole as a freelance operative

For reasons that were never revealed publicly, John left Arachnos and "retired" as Widowmaker. Very little was said how this could be possible as being in Arachnos is considered a lifetime vocation, but it did happen after John was handed a letter from his late mother and after a clandestine meeting with Statesman.

There are still many that believe that John never left Arachnos, that to this day he is still working for them. This follows the Arachnos conditioning that says that one can only leave the organization when they are dead and buried.

After leaving Arachnos, John carried out several high-risk freelance operations for Crystal's older brother, Matthew Burke. This netted him a sizable fortune, even though he continued to live modestly in Cap au Diable. During this time he also began to date Dr. Shelly Percey, a specialist in superhuman beings. Initially the treatment was for the Widow blades which were still implanted in his arms, but eventually she was curious in his other abilities which began to develop. This eventually developed into a romantic relationship, at least on his part. (While normally such a relationship would be unethical, ethics are somewhat lax on the Rogue Isles.)

At the behest of Matthew, John was brought into the supervillain group known as The Libra Order. This was done so he could serve as the control agent for members of the Guardians of the Dawn who were in the Rogue Isles to carry out a clandestine mission disguised as Libra Order operatives.

Following the mission, he was also given an honorary membership to the Guardians and welcomed to visit anytime.

He continued to operate as a member of the Order, but was given very few assignments either by Libra or by Tainted Eve. Other members of the Order questioned why he was even allowed to stay as a member, especially after he helped the Guardians impersonate them.

During the events in the "Galatea Dawning" storyline, John tried to help the Guardians in taking down Leona Powers, but Libra refused to allow it. John's defiance would be the "imbalance" needed to allow Misty Mysery a chance at retribution.

As told in "Guardians of the Dawn AFTERMATH", John Cole disappeared following Longbow taking control of Fort Darwin, along with Matthew Burke. Midnight Arachnia risked her life to return to Mercy Island, only to disappear as well.

Months later, it was discovered that both John Cole and Midnight Arachnia were recruited by Libra for an undisclosed mission. Prior to the start of that mission, though, Libra announced that certain events had changed (namely the death of Statesman at the hands of Darrin Wade). Midnight Arachnia was sent through for the mission, while John Cole remained in Limbo.

When Icon Powers, ExGemini, and Tainted Eve arrived in Limbo to search for their missing associates, they discovered John held captive by Libra's forces, with all of his Arachnos implants forceably removed from his body. Libra declared that he had freed John of all ties to both Arachnos and the Libra Order and was no longer welcomed in the Rogue Isles.

Icon took John through to Paragon City, where he finished healing at the Vanguard headquarters inside the Rikti War Zone. It was there that he was informed of the death of both his father and half-sister.

At the end of "The Guardian Powers" #15, John is seen as a member of the newly-restored Guardians of the Dawn.

In the PNN News Break, a stranger wearing a Vanguard uniform was seen working closely with Galatea Powers. The media and fans of Galatea dub him "Guy", as in "lucky guy". We later discover in "Guardians of the Dawn GRADUATION" #3 that this was John Cole in his Vanguard outfit. After reporting in with Gaussian on Galatea's activities (including admitting his intimate relationship with her), he is told that he needs to take a more "active" role with the hero group.

In "Furia and the Guardians" #2, John is seen wearing a new outfit which highlights the star-shaped insignia of the supergroup. Although he is sent out in the field to help fend off the robot attackers, he was not given a hero-name at the time. It was PNN reporter April Ramirez that dubs him "Guardian Star".

John Cole's first love was Crystal Burke. The two were childhood friends and eventually began working together as young recruits to Arachnos. During one of their later missions, they became intimate. But not long after their intimate encounter, Crystal disappeared. He had feared the worst until Crystal's brother Matthew explained that she was sent to America for reasons that he did not know at the time. Matthew would later explain to John the real reason why she had to leave and why her brief return to the Isles had to be kept secret. He still holds a special place in his heart for her, even though she has few memories of her time with Arachnos, never mind of their brief intimate time together. (Parts of her memories were initially erased by Legacy Chain.)

Upon his mother's death, John was given a letter that explained some of the additional abilities he possesed. During the late 1980's, she was an operative for Arachnos, assigned to Paragon City for infiltration and seduction. She had seduced Marcus Cole, otherwise known as Statesman, who at the time was still grieving over the loss of his wife, Monica Cole (the sister of Lord Recluse). She returned to the Rogue Isles and used her connections with Ruth Burke to hide under the last name of Cole. The letter explained that John is in fact the son of Statesman. After meeting with his father, John learned that Statesman had no knowledge of these things and was surprised when an identical letter was sent to him in Paragon City. Their relationship was distant, compounded by the fact that John was a member of Arachnos and still possesses some of their technology.

John became involved with Dr. Shelly Percey, a superhuman specialist at Black Heart Hospital in Cap au Diable. Their relationship was originally one of doctor-patient, but eventually developed into a romatic relationship. This relationship doomed to fail, though, because she felt she could not compete with the feelings that he still has for Crystal. Following the events in "The Guardian Powers", Shelly had sent John a package through Vanguard. The package contained her string bikini and a note saying it would be the only way he would see it from that point on.

John's connection to member of the Libra Order was extremely strained. He was "recruited" as a matter of opportunity, and since he was involved in letting known heroes "borrow" the identities of members of the Order, they blamed him for the chaos that followed in their own lives. It is not known if any of them worked with him during his time in the Order.

In "Guardians of the Dawn GRADUATION", it was seen that John is in an intimate relationship with Galatea Powers, although he has some questions about her feelings for him. In "Furia and the Guardians", it was revealed that while he does have feelings for Galatea, he also was assigned to keep an eye on her to report on her increasing power levels and whether or not she began to develop hyper-intelligence. Galatea has admitted to him that she knows about his assignment and that they still are in a relationship. She has also said that she wants to count on him for support as she begins her ascendency into being an incarnate.

In an alternate future shown in the "Time and Changes" storyline, John follows his father's path and becomes known as Statesman II, becoming a symbol of the resistance in a world taken over by Recluse and Arachnos. Joining forces with Galatea Powers, they manage to defeat Emperor Recluse and liberate Paragon City.

This future has been rendered moot by recent events, including the death of Stateman in 2012.

Guardian Star's Primary power is Street Justice. Although not considered super-strong, he is a skilled melee fighter even against powerful opponents.

His Secondary power is Willpower. He doesn't have his father's invulnerability, but he still can endure much and power on through. He got additional protection from his use of Vanguard armor, which, like Galatea's battle armor, contains some protections against magic.

He also retains the power of flight, which he inherited from his father's side of the family.

It is not known if he has any of his father's other abilities, or if he has the potential to develop them, which included incarnate electrical powers.

Prior to the events in "Guardians of the Dawn AFTERMATH", John Cole was an Arachnos Widow.

His primary ability was Widow Claws. As part of his Widow training, retractable razor-sharp claws were embedded into his hands which allowed him to slice through even the toughest armor. The tips of these claws also included toxic poisons which further caused harm to his victims.

His secondary ability was Teamwork. Similar in some ways to "willpower", his skills were seen more to bolster team activities than just solo participation.

There were additional devices implanted in his body designed to monitor and control his activities. This was standard for Arachnos Widow operatives, although some of these could not be implanted since they were designed to control female bodies and hormones.

In addition to his Widow claws, John also possessed some abilities inherent to his family, including the power of flight. The full extent of his abilities, including whether or not he retains the same potential to become an incarnate like other members of the Cole family, were never fully categorized.

Note: Even though he was considered a villain by basis of his location and former allegiances, he was for all intents and purposes a hero.