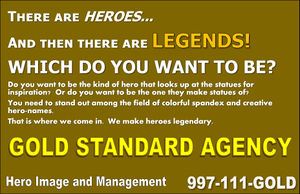 The Gold Standard Agency is a hero-consulting organization operated by Markman Gold in the world of Champions Online MMO.

It is currently not known if this is the same hero-consulting agency that operates as The Gold Agency or if it assimilated the previous agency's operations. We do know that other than the same last name, Markman Gold is NOT the elusive Mr. Gold, as the former changed his name before coming to Millennium City in 2010.

We do know that the Gold Standard Agency operates as a hero-consulting and promotion organization, often taking in new heroes and over-emphasizing their talents and over-saturating their names through social media. They have a team of attorneys and publicists to ensure that the agency stays on THIS side of the law, even though they have been investigated numerous times for their questionable business practices.

According to former employees and heroes previously retained by the Gold Standard, this is the standard "Treatment" provided by Markman Gold and his agency.

The first step in the "treatment" is a detailed assessment of the hero's career. This includes a thorough background and credit check, going through every step of the hero's personal life, including friends and family members. The hero's strengths and weaknesses are mapped out, as well as their potential strengths and weaknesses. This is supposedly done to "assess" the hero's potential, but really this is done to find out all forms of contact and social interaction, as well as determine the hero's finances.

At this point their status is listed as "potential".

Once the hero's life has been thoroughly assessed, the Agency then assimilates it.

The hero is given a "Gold-Com", a special smartphone that supposedly ties in all forms of communication through the Agency and supposedly gives them 24-7 access to their resources. This has both advantages and disadvantages as the "Gold-Com" also has an instant-update function for Nitpik, which will broadcast the hero's location to their Nitpik account (more on that in a bit).

The hero also does not have direct access to his or her bank account at this point. All funds are transferred to their "client account", which they are given a regular "allowance". This is supposedly done so that the hero's finances could be better managed, including providing for health and insurance benefits, as well as setting up a retirement account. But in reality, this is done as a means of control.

Once assimilation is done, the next step is the over-saturation of the hero's name and likeness in the media. Their status changes from "potential" to "ascended".

The hero is put through a series of interviews and special reports in the media. They are given a book deal, a "movie of the week" origin tale, a spot on the floating billboards, and then put through strenuous photoshoots and appearances through forums that best benefit their assessed strengths.

For instance, if the subject is fit and attractive, they will be featured in fitness and glamour magazines. If they are dark and brooding, they will appear in horror magazines. The attempt will always be made to push the envelope, to make their assessed strengths even more extreme. With female heroes, the push will be made for them to appear in risqué poses, showing more and more skin.

Social media is also saturated with all sorts of talk about the hero. Websites and blogs are bombarded with message posts about the hero's latest adventures. Their activities are continually transmitted to their own Nitpik account, which anyone can access and thus know what the hero is doing at any given time.

Charity events and speaking tours will be lined up. The hero will be asked to attend fundraisers and store openings and march in parades. Attendance would become manditory eventually, and "fines" would be assessed from the hero's financial account for missed appearances, even due to crisis events.

The purpose of this phase is to supposedly make the hero's name a household word. However it doesn't take long before interest wanes on the hero in question. This is even anticipated by the Agency advisors. The over-saturation actually neutralizes the effectiveness of the hero for investigations and patrols.

Once interest in the hero begins to wane, the image advisors come in and they put the hero through a series of makeovers and modifications. Their outfit is re-made to supposedly capitalize on their assessed strengths. Quite often, though, these makeovers continue to diminish the effectiveness of the hero.

At this point the hero's career track is "re-assessed" and "re-prioritized". In every instance to date, the hero's "assessed track" changes from "ascended" to "downgraded".

A "downgraded" hero at this point is pretty much left where they were before they signed with the Agency. There are no more interviews or photoshoots or public appearances. Any merchandising is discontinued and sold at a loss. Websites are left to stagnate, social media accounts are handed off to spammers, and, aside from the Nitpik account in their name, their online presense is pretty much eliminated.

Even though the supposed "perks" of success are ended, the hero is still locked into the Agency contract, which means their financial accounts are still handled by the Agnecy, and all communications and resources still have to go through the Agency itself.

Sometimes a "downgraded" hero can be recruited to private groups such as X-Tend Services, allowing them to operate without the burdens of being a hero. This will take their status right to the final phase.

At the end of the standard two-year service contract, the hero's account is given one final assessment to determine if renewal is in the best interest of both the hero and the Agency. If a hero is given a "renewed" status, the process starts all over again.

If the service is discontinued, the hero's funds are returned, the "Gold-Com" device is returned, and all communication and support resources are shut down. Their final status is "dismissed".

Criticisms of the Agency are numerous.

In the few years that the Gold Standard Agency has been in operation in Millennium City, no hero under their service have ever acheived a level of success that would rank them as "Legendary". Instead, the over-saturation in the hero's name and likeness often has a negagive effect on the hero's reputation, treating them as either sell-outs or flash-in-the-pan heroes-of-the-moment. This runs contrary to the promises of turning any hero into a "Super-Legend".

The over-saturation of a hero's name and likeness easily lead to charges of exploitation. This is especially true with female heroes, when the push is on to expose as much of them as possible through risqué photoshoots like the ones for "Capes and Boots" magazine.

In at least two documented instances, a hero's personal identity was publicly revealed because of such publications revealing birthmarks or tattoos.

Media exposure in and of itself can work against a hero, especially when one tries to be fearful. When the air of mystery is no longer a factor, that kind of hero loses a key weapon to be used against criminals.

Perhaps one of the more serious charges against the Agency is its stranglehold of a hero's finances and how they use a series of "fees" and "fines" to control the hero's activities.

Even more damaging is when a hero tries to break away from the Agency. The Agency will demand a "Termination Fee" along with an "Exit Consultation Fee", a "Transition Fee", an "Insurance Rollover Fee", and an "Account Release Fee". Quite often those fees will exceed whatever money the hero has left in their account.

Former GSA employees have also accused the agency of having a policy of never turning releasing a former client's account under any circumstance. They will use any and all excuses to delay or deny a transfer of funds, including the possibility of being arrested. One former employee claimed that she was told by her superior that should the police arrest her for refusing to follow a court ordered transfer that the agency would bail her out and fund her defense should it go to trial. The former employee then was supposedly told by her superior that such a situation would "never" happen.

Strangely enough, even though the GSA's Financial Services Department is legally declared a bank, there is absolutely no oversight by any state or federal government entity. No legislative oversight committee or regulatory agency has ever asked about or inquired about the activities of the GSA.

A new complaint being circulated involves the possible use of addictive substances to keep clients from leaving the Agency. Whether this involves illegal drugs, enhancements, or some kind of neccessary product or function has yet to be determined and is currently under investigation.

In 2011, Markman Gold carried out an ingenious and nefarious plan to take control over the life of Galatea Future, a rising hero in Millennium City.

Gold discovered during research on her that Galatea had no paper history, as she came from the "far future" according to her interview with WCOC. That meant that she had no birth certificate, no credit history, and no forms of identification other than her hero authorization from PRIMUS. This gave him the opportunity to assume Galatea's identity.

Gold filed paperwork to trademark the name "Galatea Future", claiming that she was a fictional character being played by a meta-powered actress. That meant that legally, the Gold Standard Agency literally owned Galatea Future. Once the trademark was certified, Gold wasted no time making a series of announcements and promises for Galatea to work with the GSA as well as make appearances in several publications, including "Capes and Boots". He also took control over her bank account and had all future payments for her hero-work transferred to a special GSA account.

When Galatea returned from a prolonged stay in the Canadian Wilderness, she was horrified to discover that her money was gone, and her supposed "agent" was making promises that she did not authorize. She confronted Gold, but Gold was quick to point out that legally entitled to do what he wants to her and in her name. He then demanded she report to his office the next day or else be sued for trademark infringement.

But rather than submit to his demands, Galatea publicly called out the GSA for their tactics and then announced she would resign as a hero while her new attorney battled the agency in court. She would return to the Canadian Wilderness, where she was allowed to stay in a remote cabin far away from anyone.

The trial of Galatea Future vs Markman Gold and the Gold Standard Agency took almost a year, expedited by public and private pressure for a quick resolution. Gold attempted to further complicate the matter by demanding that Galatea pay an "appearance fee" should she return from Canada. The presiding judge put a stop to that, but also allowed Galatea to give a video deposition from her remote location.

In 2012, the judge ordered a verdict in favor of Galatea Future, nullifying the trademark and ordering the Gold Standard Agency to return all money collected from Galatea Future. In his verdict, the judge said that Gold and his Agency had created a de facto state of slavery in violation of the United States Constitution, and that it trumps any form of copyright or trademark law.

Gold is still attempting to appeal the decision, but so far the appeals have been denied.

The Gold Standard Agency was first mentioned in "The Lost Adventures of Galatea Future" #4.