"When I take on a case, I'm in it to the very end. Not just when the judge bangs the gavel. Not just when the other side pays up. I'm there until all of the damage is fixed. That could take a long while, but my clients will tell you that it's worth it."
- Candace Sinclair

Candace Sinclair is an attorney based in Millennium City considered one of best and brightest in the field. She was officially honored in 2012 as being one of the many "Millennium Professionals" that came of age and assisted in the resurrection of the city following the Battle of Detroit in 1992.

Candace grew up in Detroit. She was a child when Doctor Destroyer followed through with his plans and destroyed Detroit in 1992, killing many of her friends and nearly killed her. She grew up in the resurrection of the area known as Millennium City. She attended Chicago Law School and returned to Millennium City to become an attorney. In July of 2012 she was honored by being listed as one of the “Millennium Professionals” that came of age following the Battle of Detroit.

One of her best friends is Athena Rose Fairmore, a young woman who was orphaned in the Battle of Detroit and was initially presumed killed. She helped to restore Athena's identity and has represented her in the publishing of her highly successful "Sentinels of Love" romance books.

Candace initially specialized in business law, however when she was told that Millennium City was lacking in affordable legal aid, she began cross-training in criminal law to provide legal aid to those that needed it.

While her record in criminal defense is fair, she is unbeaten in the field of business law, especially when it pertains to finding loopholes and flaws in a contract.

In January of 2012, Candace took up an unsual case involving the idendity theft of Galatea Future. She represented Galatea in court against Markman Gold and his Gold Standard Agency while the hero removed herself from all public appearances and retreated to the Canadian Wilderness. The legal battle took up much of the year, but eventually she prevailed.

During that time, Candace also picked up an unusual client: the newly-famous fiction writer Athena Rose Fairmore. In truth, this was Galatea Future's new civilian guise, using her memories of her past experiences as characters for her stories, which became widely popular. In becoming friends with Galatea/Athena, Candace helped set up her civilian guise and her residence. And with the success of her court case, which liberated Galatea from the mechanizations of Gold, Candace's firm gained plenty of new clients.

In recent years, Candace's office has focused on hero-related issues, such as copyright/trademark suits, wardrobe sanctions, and withholding of hero pay and benefits related to being a registered hero. She is licensed in three states to represent heroes in both civil and criminal suits.

At some point during Candace's growing career, she began working long hours and taking energy stimulants to keep awake and active.

One of those products was Wake-EZ, which contained a mutagen that gave people telepathic powers.

During a threatening confrontation with The Nationalist, Candace's new telepathic power kicked in, and she compelled the extremist to leave.

Realizing that being a telepath would have serious legal consequences for her and for her best friend, she willed herself to forget knowing she had these powers, thus developing a condition called the Ratner-Singer Syndrome and eventually creating a second personality called "Psyche", based on Athena's stories of a similar hero from her past. Eventually this personality developed into a more malevolent version called "Malizia". This attracted the attention of not only Galatea, but also members of the federal government.

With the help from the FBI and UNTIL's Project Mycroft, the people behind Wake-EZ were stopped, the product was pulled from the shelves, and Candace was able to wrest enough control over her own body until Galatea could put her in a "hot tube" sleep chamber until the drug could be removed from her system.

Since she did not know that she was becoming a telepath, the Bar Association let her be suspended until the drug was out of her system and then her record was expunged after six months of proving no further telepathic abilities. During that time, she worked with Project Mycroft doing clerical research.

Aside from her brief time as a low-level telepath, Candace is an ordinary human.

She does have a keen legal mind, and it has been discovered that she is a good researcher as well.

Following the Malizia incident, Candace took up firearms training so that she would never feel the need to rely on others to protect her.

She is also very reclusive outside of the legal world. Some say that she is "married" to her work. Others suggest that she's driven on by the trauma of that day in 1992 when she nearly died. Either way, outside of her friendship with Athena Rose Fairmore, she has no social or personal life.

Candace was vaguely referenced in Issue #4 of "The Lost Adventures of Galatea Future", but was not actually named or seen until Issue #1 of "Future's Guardian". 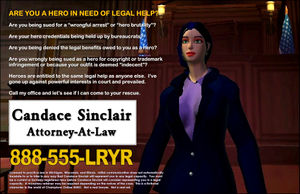