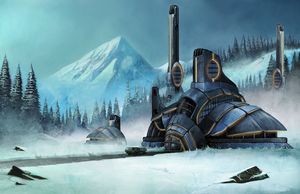 The "Canadian Wilderness" is in reference to the area in Canada north of the Arctic Circle in the world of Champions Online.

Force Station Steelhead is the local headquarters of the RCMP and UNTIL. Although the facility itself is sealed to all but essential personel, the outside grounds serve as the gathering point for heroes, as well as the location for various services including the Powerhouse training facility.

This is also the transit area for the jet that takes you to and from other locations.

It's hard to avoid seeing the giant teliscope atop Stroessen's Peak and wonder who would build it... and why. But fair warning to those cuirous enough to try to find out: the mind behind it has some very powerful means.

Amidst the beauty of the wilderness is an ugly sore thumb owned by ARGENT that calls itself a "bird sanctuary".

They call themselves "weekend warriors" simply out for a friendly game of paintball. But the color they use seems to be red, and it doesn't look like paint. They also spend a lot of time staking out Force Station Steelhead.

The area was first seen in "The Lost Adventures of Galatea Future" #4, and seen again in "Future's Guardian" #1. 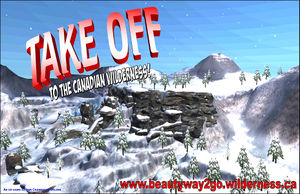