Harvey "Old Man" Hare is a character in the City of Heroes MMO. He is the founder, majority owner, and editor-in-chief of the adult publication "Glam Bunny Magazine". He is also the first honorary member of the Freedom Phalanx.

Harvard Herald Hare, or "Harvey", was born and raised in Paragon City. As a young child, he was fascinated with the camera, being able to capture moments of time for others to see. As a teen, he saved up his money delivery newspapers to buy a single-lens reflex camera. It was an obsession that would pay him back big, because he was not only first person to photograph the superhero Statesman in action, but also to later photograph other members of the Freedom Phalanx as they confronted the supervillain Nemesis during "Brass Monday". Afterward, he was not only made an honorary member of the Phalanx, but he also earned the nickname "Clicker" for the sound made when he would take multiple pictures of the action.

At that point, Harvey could write his own future. He had a standing contract with the Paragon Times Newspaper to pay better-than-average costs for every picture of the members of the Freedom Phalanx he could deliver to them. He also got a piece of the fee that the Times would charge for every photo they would then re-sell to the national media. To this day, businessmen wonder how he managed to get such an incredible deal, which, in the 1930's and 40's, was unheard-of. They could only attribute it to the general suspension of disbelief when it came to the subject of superheroes.

In December of 1941, Japan bombed Pearl Harbor in Hawaii and German invaded Paragon City in Rhode Island. While the Japanese attack was a success, Germany's invasion failed because of the noble sacrifice made by the superhero Atlas. While Harvey was not present during that momentous battle, he was there afterward to take pictures of the fallen hero amidst the wreckage of the German army.

This brought the Freedom Phalanx into World War II, and, with them, their new official photographer. Harvey was given an officer's rank of lieutenant and assigned to be the exclusive photographer of the Phalanx during their blistering assault on the Nazis. Harvey was with the Phalanx and the Dawn Patrol as they led the Normany invasion in 1944. Sadly, he was also the one that witnessed Statesman be badly injured from their battle with the Nazi Storm Korps. He refused to take a picture of the aftermath out of respect.

With Statesman out of action for the duration of the war, Harvey followed Maiden Justice and the other members of the 1st Hero Brigade on to Berlin. There were rumors of an infatuation with Maiden Justice, but Harvey denied it, saying that he respected Statesman too much.

He began work on a publication that would cater to the post-war adult male. This would feature stories and interviews, but would also include "tasteful" pictures of beautiful women, similar to the kind seen in those pin-up images. When seeking support for this publication, one potential investor referred to him as "going from Clicker to the Glam Bunny".

Glam Bunny Magazine was first published in 1958, during the rise of the social and sexual revolutions of the time. Originally published under the pseudonym "Bill Bunny", Harvey's publication was not immediately welcomed in Paragon City, which was still in the repressive 1950's McCarthy-like mindset. But, as societal thinking changed and norms and mores change, Glam Bunny became more acceptable and more risqué, and, eventually, Harvey was able to drop the "Bill Bunny" pseudonym and publicly own his role in the magazine.

His connection to the Freedom Phalanx gave him the leverage to ask young female heroes to pose "artistically" for his publication. This led to some spirited debate within the superhero community. This came to a head in 1969, when the daughter of Statesman and Maiden Justice, Miss Liberty, agreed to pose for the magazine. Even though she only wore a one-piece swimsuit, the mere knowledge that she would pose for an "adult publication", never mind be interviewed for it, caused outrage.

This not only ended the friendship between Harvey and Statesman, it also forced him to relocate his base of operations from Paragon City to Miami.

Harvey weighed in on two places to relocate his publishing empire. The first place was Los Angeles, where there would be plenty of young aspiring starlets to reach out to. The other location was Miami, which, at the time, was not really that big. (This was before the scourge of drugs and the introduction of drug money to the area.) Harvey chose Miami because of the proximity to the space program and the heroes that would defend the area from Arachnos and the Council.

Harvey built a massive waterside mansion for himself and for Glam Bunny Magazine, which was playfully dubbed the "Rabbit Hole". This was a beautiful playground for his "Glam Bunnies" to frolic in and pose for. Thanks to his move, Miami became "the" place for aspiring models to live in, as other publications would set up places of their own to mimic Harvey's success.

During this time, Harvey got married and divorced three times. The first time was with a wannabe actress. The second was with a country club debutante. The third was with one of his Bunnies. Each of the divorces were mutual and with no perceived drama, and all of his ex-wives and his children are still generously supported.

In the 1970's Harvey began to include non-profit foundations and charity work to his company's business. As a newly-transplanted Floridian, one of his personal crusades involved helping save the manitee. After the 1975 Finland incident, he began branching out into the European market, and his Hare Foundation reached out to those affected by the nuclear detonation that almost killed Statesman and nearly started World War III.

In the 1980's, Harvey was under legal attack by the Department of Justice, along with all other adult publications of the time. Fortunately for him, Miss Liberty came to his defense. Her spirited defense on behalf of the First Amendment stopped the crusade against "indencey" and embarassed the politicians eager to put men like Harvey in prison.

Harvey's empire expanded in the 1990's into the "new technology" of cable and the Internet. "GlamTV" provided softcore movies and features on the publication. It would eventually be sold to a foreign media conglomerate. "GlamBunnyExtra-dot-com" was launched in 1999 and continues to serve as the online presence of the publication.

While the extradimensional invaders known as the Rikti focused their attention on Paragon City, no place was safe from attack when they invaded in 2002. Even the "Rabbit Hole" suffered some damage and some of the models and staff members were injured. But Harvey's continued faith and support in heroes provided some help. He organized fundraisers to help with the survivors, and he provided shelter for heroes and their loved ones who were made homeless from the attacks.

In the years following the Rikti Invasion, Glam Bunny magazine was rocked with the discovery that Glam Bunny of 1995 Jen Glamour was living a lie.

Jen Glamour was really a morbidly-obeese woman named Jennifer McGillicuty, and she hid her weight and her hideous looks through her telepathic powers and an illegal drug that made her self-illusions physical. Her telepathic ability allowed her to passively manipulate the minds of others, including Harvey and his Glam Bunny staff. This was how she became the Glam Bunny of the Year instead of her more popular "rival", sister bunny Jenny Star. Even though Harvey made sure she got all the help she wanted, his company had to publicly distance themselves from her.

The scandal also called into question how showcase models were selected, especially when it came to the Bunny of the Year award, which gave generous rewards and access to fashion and media magnates. Harvey himself considered retiring, wondering how easily it was for him to be manipulated.

In 2007, a new hero was seen in Paragon City. Jenny Star had re-invented herself as J-Star and was getting the attention of the local media as a hometown glamour model doing good.

Rather than retire, Harvey decided to move back to Paragon City. With help from his friends, and Jenny Star herself, Harvey built a new Bunny Mansion, while keeping the crux of the publication operations in Miami.

As a civilian, Harvey Hare has no special powers other than his photographic talent. 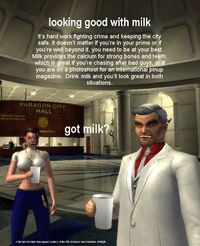 According to creator David 2, Harvey Hare is based on the late Playboy Magazine founder Hugh Hefner.

Although not (yet) seen in comics, he is referenced in the text-only "Battle of the Jens" story. He also appears in a "Got Milk?" ad with J-Star.