Battle of the Jens

Battle of the Jens is a text-only story that takes place in the now-defunct City of Heroes MMO.

The story introduces J-Star and her rival Jen Glamour as two centerfold models for Glam Bunny Magazine. While their rivalry is excused as simply media hype, it does take a superhuman twist that transforms one of them into a hero and another into a villain. 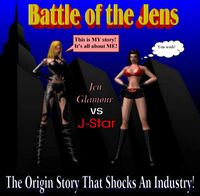 Jen Glamour would later appear in the pages of Furia and the Guardians working for Lexie Lothora. Her boss mentions J-Star by name, which makes the story cannon with other stories published by Battlerock Comics.

According to creator David 2, the story will be re-introduced as part of an upcoming special featuring J-Star.