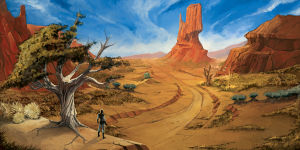 "Burning Sands" is in reference to the geographic area in the world of Champions Online in the American Southwest. It's also referred to simply as "Desert".

This area was once known as White Sands, New Mexico. But then, after repeated nuclear testing in the 1950's... not to mention an alien crash or two... the area became known as "Burning Sands"; a place deemed too toxic for some heroes to be in without getting sick.

For reasons that defy common sense (not to mention basic human decency), this is also the location of Stronghold Prison, the "super" of "Supermax" correctional facilities, where the worst of the worst of the worst are housed. It is not far from both the infamous Area 51 and the PRIMUS Project Greenskin program.

Project Greenskin is the joint PRIMUS/UNTIL facility that was built in dedication to the brave lives that were lost trying to bring down the supervillain known as Grond. The essential portions of the facility are still off-limits to heroes, but the grounds are open as the transit point to and from other locations, as a meeting place at the park, and also access to the Powerhouse training facility.

Otherwise known as the Stronghold Prison, the two giant stone statues serve as both geographic markers and as a warning that one is approaching the ultimate in Supermax detention facilities.

Yes Area 51 exists! It's just abandoned. Or is it? Someone is there, and it's not the U.S. Military.

Snake Gulch was meant to be a tourist's dream: a beautiful recreation of the Old West complete with authentic-looking cowboys and gunslingers and beautiful barmaids.

But these weren't actors in costumes, oh no! These were robots created by the wonderful and friendly genius that is Tyrell Donaldson. They were meant to move and respond like real people from the 1864, living their artificial lives in the very real buildings of the time that were painstakingly restored.

Unfortunately something went wrong. The robots began acting weird. Someone or something began messing with their programming.

It's still open if you dare to venture a visit. Just be careful.

Not far from the worst of the nuclear testing sites is the mining town of Burnside. The town was abandoned when the last vein of gold was tapped out, but recently it has been active with the ghosts of its inhabitants. Some force has brought back the spirits of the men and creatures that once lived there.

Witchcraft can be found there as well, looking to bring the spirits to peace.

Next to Burnside is an ugly and jagged scar. This is where we foolishly tested all sorts of nuclear weapons, both "large" and "small". We thought it wouldn't cause harm, but we forgot that even the desert is teaming with life.

We once called it "Uranium Flats", but now it's known simply the Atomic Wasteland.

This is where Grond calls home, and now Grond has followers. Many followers. 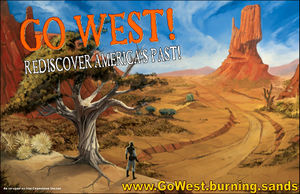