Grond is a villain in the world of Champions Online MMO. 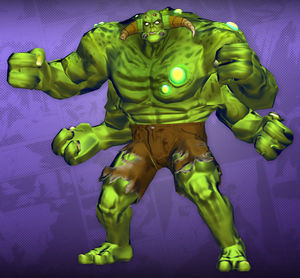 A three-strikes criminal named Sidney Potter thought his luck had finally run out. Now sent to prison for seemingly the rest of his life, he took one last chance at freedom by taking part in the testing of a new "super-serum".

Unfortunately his bad luck streak became catastrophically worse for him. He was given the wrong serum, which put him in a berserker rage. When the guards tried to subdue him, he was thrown into a wall full of dangerous chemicals, which gave him incredible strength. Breaking through the prison walls, he stumbled and fell into a river that was loaded with hazardous wastes. And if that wasn't bad enough, he was then struck by lightning. That was the last anyone ever heard of Potter.

Days later, a four-armed green-skinned monster calling itself Grond began destroying the nearby city. He was eventually captured and discovered to be what was left of Potter, but there was no way to reverse what was done to him.

In the years that followed, Grond somehow found himself escaping from prison and going on brutal rampages. Every time, he would grow in size and strength.

Eventually he found himself in the wastelands of Burning Sands, where the radioactive remnants of America's nuclear testing program gave him some sense of solace. But it still wasn't enough for him. He was still hunted by both man and hero.

But then, after one of the most devastating battles between Grond and soldiers of the United Nations Tribunal on International Law, he found that he had followers, people like him that wanted to be like him. His mind may not fully comprehend the significance, but there is a portion of him that was once Sidney Potter than thinks that, for once, his luck has changed for the better.

Grond is unstoppable rage and might. He has seemingly limitless strength and resiliency, able to take on even the most powerful heroes in a one-on-one battle and win. And the madder he is, the stronger his power.

His four arms gives him the added advantage in a fight. Essentially you are fighting two people in one body.

Grond can also use that strength to leap extremely long distances. He often uses it to travel around Burning Sands to avoid detection, but, when properly motivated, he can use it to propel himself to even greater distances.

While Grond is seemingly unstoppable, he can be worn down and overcome, especially in teams. The trick is to keep wearing him down.

While Sydney Potter was a bitter man, there is very little of that in Grond now.

Grond is simply rage and fury. He is primal force.

Grond was referenced in "Future's Guardian" #13.