Project Greenskin is a government facility in the world of Champions Online MMO. 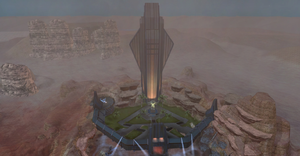 It is the name of both the base in Burning Sands, New Mexico and also the name of the PRIMUS organization that is dedicated to the investigation and handling of radioactive activities.

Although Project Greenskin is a division of PRIMUS, it is also partners with the United Nations Tribunal on International Law. They have also entered into several agreements with certain private agencies for research purposes, with the implied understanding that these would be dedicated to either removing the radiation or to treat and hopefully cure all the irradiated mutates in the area.

Its current director is Robert Kaufman.

In 1978, the United States Army tests a new "delta" bomb just outside White Sands, New Mexico. The resulting radiation was more than any ever experienced, scarring the area and turning it into a wasteland that was renamed "Burning Sands".

In 1995, a lowlife thug named Sidney Potter was given experimental drugs mixed with radiation as part of an experiment. The experiment transformed him into the menace known as Grond. In a fit of sheer rage, Grond laid waste to the military base, slaughtering everyone there.

Two years later Robert Kaufman, formerly the head of PRIMUS, takes over the base, which was since rebuilt into Project Greenskin. Not long afterward, though, the base was attacked by a returning Grond, who had also amassed a small army of irradiated followers to lay waste to the area. They managed to take over the base and force the humans to retreat. They then turned it into their new home, complete with radioactive waste, and a huge statue of Grond.

Kaufman called on all help from UNTIL, PRIMUS, and the superhero community in general to overcome this new threat. The irradiated were defeated, but Grond managed to escape. Kaufman announced that the huge statue was going to remain along with the plaque memorializing all the lives lost because of Grond. The statue would serve as a reminder of the threat they face.

Since then, Project Greenskin continues its mission of finding and eventually stopping Grond. It has also pledged to do everything they can to fix the sins of decades of nuclear testing which has scarred the area.