This page is dedicated to Kinetic Kitten, the Blaster, played by User:TechSpider.

Little is known about Rona Cosell prior to her meteoric rise in PNN. Just prior to the Rikti Invasion of 2004, with the advent of the Supers city-wide, it seems according to the New Network's own files, she was a Junior Anchor and Fact Checker on the Situation Room, a show on PNN. After the events of the invasion, she was given her own show, and started interviewing Supers.

This led to the highest ratings PNN had seen from any show in it's short history as a local network. Rona's ratings had risen so high, so fast, this led to her developing a 'pre-madonna' status in her own mind. And her shows became more 'Rona' centric, instead of 'Super' centric. Along with her announcer, Johnny, who no one has ever seen on camera, (Other personalities at PNN also state that they have never recalled seeing him either, leading to the questioning of his actual existence) Rona continues to bring in the highest ratings the network has. Followed closely by Garry Becker and his show the Garry Becker Experience. See a List of PNN Media Personalities here. 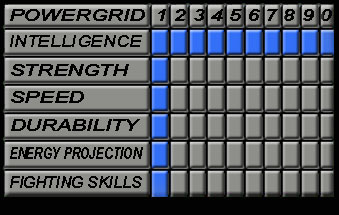 Relationships with other PNN Personalities

April Hernandez - Rona has very little interaction with April, although Rona has been known to 'hijack' April on air.

Faith Nottingham - Rona has no interaction with Faith at all, considering her to be a 'wannabe' journalist who covers fashion and other non-important things.

Garry Becker - Absolutely Rona's biggest competitor for ratings at the network, her relationship with Garry is rocky at best. Rona considers Garry to be a crackpot conspiracy wingnut, and will not hesitate to throw him and his show under the bus at any opportunity.

Jason Smith - Rona respects Jason for what he has done, and even though he was fired from PNN, for manipulating facts in stories, Rona still considers him a true journalist. One that will do whatever it takes to get the story, in her own words.

Matt Myers - Rona considers Matt to be a man who takes advantage of situations to futher his career, therfore respecting him but watching him closely.

Robin Steed - The only interaction Rona has ever had with Robin, was mistaking her for an intern and ordering her to get Rona coffee.

Sally Carson-Ramirez - Considered by many to be the next "Rona", and considered by Rona to be a younger threat to her career. It has been publically shown that Rona feels somewhat threatened by Sally, as at one point, Rona pulled Sally's pre-taped show from the air in mid-stream. The show was put back on the air promptly, but not before the world discovered the jealousy Rona holds for her.

Rona Cosell's: Behind the Mask

This comic and others can be read at http://www.kkcomics.com