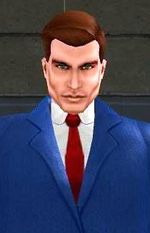 Jason Smith is a media personality for the Paragon News Network. He is often doing man-on-the-street interviews in Paragon City. He is known behind the scenes as a premadonna and tends to manipulatea the facts and use people to further his career. His first appearance was in Issue #4 of the Justice-Knights series.

Jason's in-your-face style of reporting, which consists mostly of shoving a microphone and camera in the faces of people and getting them to react to his questions, has sometimes aggravated citizens and even some heroes such as Biosphere.

In the six-part "Obey" storyline, Jason was first seen as the reporter assigned to cover the public statement made by Manticore concerning the Cyril Corporation. He was in a prime position to cover Sin Stalker's questioning of Manticore's legitimacy in front of City Hall.

His continued on-the-scene reporting would further aggravate matters between Sin Stalker and Manticore and would eventually lead to the public's perception of Sin Stalker and his associates as public threats.

This storyline is ongoing.

After the events of Obey and Jason Smith's exaggerations and minipulation of facts, he was fired. His current whereabouts are unknown but rumor is he found a job at a local fast food chain.

The author of the Justice-Knights has plans for this character to return but not as a news reporter.