CySoft is a division of the Cyril Corporation that specializes in computer software in the world of City of Heroes MMO.

Many businesses were destroyed during the 2002 Rikti Invasion, especially software companies. This opened the field for both Crey Industries and CyCorp to fill the gap.

Crey was the first to the market with their CreyWare line of operating systems and productivity packages. Almost immediately the critics bashed the programs as being "Cr@pWare", and there were accusations of intellectual property theft from other previous operating systems. Although Crey attorneys were able to quash the lawsuits and provide documents of their reverse-engineering, software critics still have little to say positively about the company or its products.

CySoft soon followed, providing a simple and reliable operating system based more towards businesses. Once they developed their credibility, they eventually expanded into the personal and home software services, much to the pleasure of programmers that were tired of the buggy and adware-filled CreyWare programs.

Today CySoft provides the operating system for the CPCU systems used by most supergroups in Paragon City as well as those in the Rogue Isles. They are also the preferred company for more than half of the businesses in Paragon City, especially in Steel Canyon. While they will not claim that their software is "hack-proof" (a dubious claim once made by a CreyWare executive) they will say that their software has not failed, and have even gone so far as to offer a million-dollar reward to the programmer who could find such a fatal bug.

In 2015, network systems across Paragon City were compromised by an adaptive software known as Assembler Code. The software bypassed certain security protocols in the CySoft systems, coopting network functions on behalf of a supervillain named Destitution.

CySoft programmers later determined that Assembler Code did not coopt the operating system itself, so therefore the "fail-proof" claim was still intact. But this claim is disputed by others in the software business.

CySoft software was seen in use in "Guardians of the Dawn Spotlight" #12. 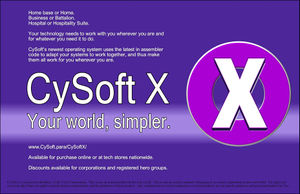