Vibora Bay is city in the world of Champions Online. Access is reserved for high-level heroes.

Vibora Bay resembles New Orleans in its southern style and heritage. It also an area heavily into magic, especially voodoo.

The premiere hero for this city is Black Mask, a legendary crimefighter that has existed for countless generations from parent-to-child. Sapphire can also be seen here on occasion.

Located on the Florida Panhandle, the lovely city of Vibora Bay is about 60 miles east on Pensacola and 80 miles southwest of Tallahassee. By population, Vibora Bay is the largest city in Florida, with just over 800,000 inhabitants (slightly more than Jacksonville, which has 750,000), and the largest “metropolitan statistical area” (including the withered smaller cities and communities surrounding it) with a total population of 1.8 million (the Miami/Hialeah/Coral Gables area is next, at around 1.2 million). Since Florida is the fourth-largest state in the United States, this makes Vibora Bay one of the most important and influential American cities.

Vibora Bay sits on the coast of the Gulf of Mexico – the enormous, partially-landlocked body of water that borders five American states and five more of Mexico, as well as the island of Cuba. The Gulf's formation is usually dated to having happened 300 million years ago, thought to have been formed by subsidence of the sea floor, and though it's shallow around the "rim" it becomes quite deep (as much as 4 km) in the central and southwest areas. It's a major waterway for shipping and industry, as well as fishing and offshore mining.

The water of the Gulf can be astonishingly warm and the city's excellent commercial beaches are no exception, averaging over 80 degrees Fahrenheit during the summer months and rarely dropping below 60 degrees even in the depths of winter. The waters are considerably calmer in the Gulf than on the Atlantic side of the state, which results in little surf unless there’s a storm brewing (an event that draws a few thrillseekers to locations like Seagrove and Panama City Beach, despite the best efforts of police and rescue workers).

Due to a minimal amount of sediment reaching the shore by the river in this area, the waters along the coastline are often breathtakingly clear and green, in delicate shades of turquoise and emerald. The white sands on a sunny day can be blinding to tourists not wearing sunglasses. Since Vibora Bay sits well back on the North American continental shelf, the water remains shallow for a considerable distance, allowing waders to walk hundreds of yards out from shore in some locations. However, as the city’s name indicates, it sits on an excellent natural bay with the deep water necessary to support shipping. Before aquatic research facilities began settling in the Keys, Vibora Bay was a very popular location for research groups, both private and government.

(Check out Vibora Bay's other Wiki entry for even more detailed information.) 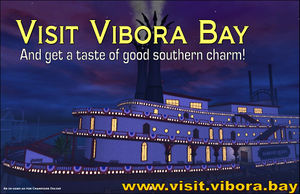