Black Mask is a legacy hero in the world of Champions Online. She is often seen in Vibora Bay. 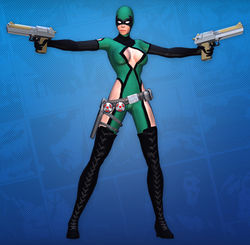 The most recent Black Mask

The legend of Black Mask is well-known in the humble Southern coastal city of Vibora Bay.

For generations, it is said that the spirit of justice and vengence would summon a champion that would right the wrongs that the world of man failed to. He is everywhere... and nowhere. He goes where the law cannot and does what the law would not.

But that legend started with one man. A man that would put on a green-and-black outfit, pick up a gun, and dispense justice. And when that man became too old to carry out justice, he would train his sons to follow his cause. They too would be Black Mask. And thus the legend of Black Mask was one of a seemingly immortal force for justice.

Today the legend of Black Mask continues, only this time through a woman.

Although the previous Black Mask did not want to turn the mantle over to a woman, he had no choice. Jennifer Ward was the only child to the family, and even though she was willing to carry on the family legacy, her father refused to train her. Partially this was because of her safety, but also because the "legend" held that Black Mask was a man. Thus Jennifer turned to her grandfather to train her in secret, which he eagerly did.

Eventually her father relented and turned over the mantle of Black Mask for the first time to a woman. And, thankfully, the community did not object to the "legend" suddenly being female.

Today, Black Mask continues to serve as a force for justice in Vibora Bay at a time when it needs her the most.

Black Mask is a skilled fighter, trained in many forms of hand-to-hand combat, but she is especially skilled in Capoeira.

She also carries firearms and is not afraid to use them. In fact she is as skilled with them as she is with her hands and feet.

Black Mask is modestly seductive. She flirts when needed and wears an outfit that shows off enough skin to distract her opponents.

When she is not "in work mode", Jennifer Ward is a horror writer, writing novels under a pen name, as well as a writer of several freelance articles under her own name.

In the early parts of her career, she found herself attracted to Defender (who hasn't?), but eventually she placed the needs of Vibora Bay over her own.