From the start of America's entry into World War II, the US government needed a band of highly skilled and super-powered beings to fight against the Axis forces of Nazi Germany, Fascist Italy and Imperial Japan; they were the Allied Fighters.

For nearly four years, Captain Invader and his team of Allied Fighters valiantly fought against the Axis forces, becoming legendary in their victories over the Nazi Germany, Fascist Italy and Imperial Japan, especially against the team's arch-nemesis, Baron Berlin and his own Nazi team of super-beings known as Axis Force. On V-J Day (Victory in Japan Day), the last day of the war, the Allied Fighters disbanded, each going their own way, most, never to be seen again.

Move forward to the 21st century. The near-centennial aged "Major" Invader is finally ready to retire when an old threat returns from World War II. The threat is Baron Berlin and his Axis Force, and their new goal to create a fascist nation of Reichsland and bring the glory of the Nazi regime back through their new call for a Fourth Reich against the world.

To stop Baron Berlin's machinations, Major Invader has once again formed a new team of young, powerful specialists and super-powered people to bring the fight to Baron Berlin - before its too late... 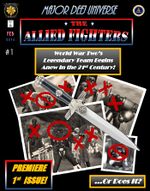 PREMIERE ISSUE! "He's Back!". A centennial-aged Major Invader contemplates what to make of his final years at a ski chalet in the Appalachian mountains when the call comes in from the US government. Will the Major finally pass the torch to a new generation of heroes or will this broken-down, cantankerous alcoholic instead start a new team and lead from the front as he did in World War II?

In addition, Angelica Demer, a grande dame of French Society and a long retired French Intelligence agent, faces an unprecedented attack against her family and her estate. What secret is the Demer house hiding, and why does the enemy, only known as "they", want her grandchildren?

Follow the beginning of the reformation of the Allied Fighters in the 21st century, starting with this fantastic first issue!! 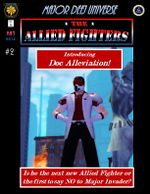 In addition, we learn the mystery of "Q"; who is he and what secret life is he leading?

Plus: Major Invader sends out his spam snail mail to other new potential teammates!

To add a more evil element: Baron Berlin strikes...and it is truly DEADLY!