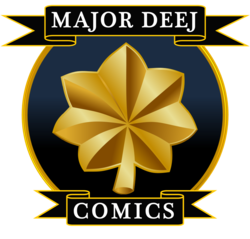 Today, Major Deej Comics (MDC) is based solely on the characters, locations and stories of the Major Deej Universe[3].

Starting with its first published comic, Major Deej Universe: Origins on 27 Jan 2016, the MDC continues to write comics and stories based on a key principle idea: "What is a true hero?". This idea has been batted around other 'profitable' comics groups from many decades. Most got the idea right, but over the decades, the true meaning of 'hero' has been warped and subject to slights and insults, thus diluting what a true hero is. In order to truly identify was a 'hero' is in today's world, the MDC intends to show, through its stories and comic series, different avenues of what a hero is...and isn't. This comics line will also show the sacrifices, accolades and, in some respects, the sadness, of what it is to be a hero.

Major Deej Comics is a non-profit comic book group currently based out of Brooklyn, Connecticut.

This category has only the following subcategory.

The following 2 pages are in this category, out of 2 total.