Situated in the New Haven district of Cap au Diable, RIU was initially a private school for the spoiled rich families of the Isles. During the reign of President Marchand, RIU was considered a sister college to Steel Canyon University in Paragon City, with professors often travelling to both places to discuss various ways to improve the economy in the Isles. Sadly with the death of Marchand and the takeover of the Isles by Lord Recluse and Arachnos, this alliance quickly dissolved.

For several years, education languished under Arachnos rule. Obedience and compliance were placed above intelligence and learning. The rich and powerful that chose to remain in the Isles continued to send their children to RIU, but as educators got older and older (and others managed to escape), the quality of that education stagnated.

Doctor Thaddeus Aeon, genius inventor and the governor of Cap au Diable, realized that the area lacked the people needed to keep his Power Transference System running. While bodies were plentiful, most lacked the intelligence needed to operate or even maintain the equipment. He authorized a complete relaunch of the university, offering to teach several courses himself. He brought in John Yu as RIU Dean, who was initially excited about the opportunity to stat a new school.

Sadly, Yu's dreams were quickly dashed as many of the great minds he wanted to bring over either rejected his offers or were denied entry by Arachnos as being "too subversive". The only people that he could bring over were either Diploma Mill graduates or those who taught primarily in diploma mill schools.

Much of the educational material comes courtesy of the Black Market, with a truck perfectly located in between the campus and the Rogue Isles Ferry. Dean Yu has stopped asking where they got the material.

Operatives, especially the so-called "Destined Ones", are invited to take part in the special "Inventions" program, offered free of charge. (Yu bills Dr. Aeon $5000 per enrollment, who then bills Arachnos, who eagerly pay with counterfeit money and worthless credits.)

It is also said that certain members of the Midnight Squad are seen on campus. Whether or not they still maintain an access point to their rumored "Midnight Club" remains to be seen. 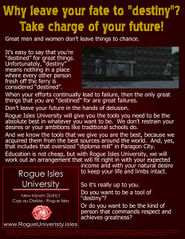