Praetoria is the shining city-state of the Praetorian Universe, where Emperor Cole rules over the "privileged". 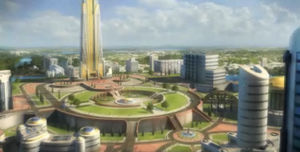 With much of the world devastated thanks to the Hamidon Wars, Emperor Cole and his loyal lieutenants, the Praetors, began to set up a new stronghold that the Devouring Earth could not touch. Using sonic devices, a plot of land was purged of Devouring Earth, and a new city was built.

Dubbed First Ward, Cole declared this to be the start of a new world that he would bring about within a generation.

Sure enough new buildings began to appear and refugees began to pour in.

But soon the dream became a nightmare as the Hamidon and Devouring Earth found a way to invade the city from the inside. A massive evacuation order was given and First Ward was abandoned. After the last evacuation ship departed, the decision was made to declare the area completely lost and any remaining citizens in the area killed.

Following the completion of First Ward, Praetor Keys set up a new land for the creation of Cole's promised City-State. The first city built was Imperial City, and it quickly became the place where the refugees from First Ward were sent after its fall. The other districts of Neutropolis and Nova Praetoria soon followed.

Praetoria prides itself in being a meritocracy in which appointments are made to the potential good that one brings to the city-state. As long as one continues to provide talent and value to the system, they are compensated appropriately. Basic social services are provided free of charge provided one is in good standing. Additional services are provided through a basic credit system.

Most menial tasks are handled through Praetorian Clockwork drones, which take care of basic beautification and maintenance. This frees up citizens to pursue more intellectual opportunities depending on their skills and intelligence.

Although Praetoria is visually beautiful, there are some necessary restrictions made for the good of the city-state.

The Praetorian Police Department enforce all laws, no matter how minor, with an iron hand. In addition, Praetor Tilman's legions of Seers carefully screen all wayward thoughts for those deemed "dangerous", and those suspect of having "dangerous" thoughts can either be put in "protective custody" by the PrPD, or else they can be given an on-the-spot audit.

Certain subjects are off-limits. While magic is not outright illegal, any references or mentions of covens are "discouraged", especially given that the covens refused to aid the Praetors at a time of need. Known witches are to be killed on sight. Mentions of the world before Praetoria are also "discouraged", but not outright illegal... yet. Questioning a Praetor is illegal. So is refusing to obey any order given by the Praetorian Police, or interfering with the actions of a Seer, especially during an audit.

Also, any thoughts about First Ward are "discouraged".

Book of the Praetor

(See also "The Book of the Praetor")

To help maintain control, the decision was made by the CDEC to re-write history using religious overtones. Thus the "Book of the Praetor" was created to give Emperor Cole and his Praetors an over-inflated sense of importance. The book canonizes Cole as being the new "God of Man" or the "Man made God", waging a spiritual war against the "Gods of Old" and their "champion", the Hamidon.

While initially rejected, more and more people have come to accept the messages given in the Book and have starting using the phrase "Praise be to Emperor Cole, the Man made God" at the end of their conversations.

Praetoria was not seen in the Top Cow incarnation of the "City of Heroes" comic series when the Freedom Phalanx briefly visited the Praetorian Universe, leading one to suspect that the city-state did not yet exist and was only finished after the events in that issue.