He makes a cameo appearance in the "City of Comic Creators Compendium" Issue #5 as his speech in Atlas Park is interrupted by the 5th Column. He is subsequently rescued by StarCygnus of the Guardians of the Dawn and later gives praise for the cyborg's heroism.

He again appears in flashback in Issue #14 of the Guardians of the Dawn Spotlight series to further expand on the scenes depicted in Compendium #5.

He appears once again in a PNN News Break segment as he defends opening diplomatic relations with the Rogue Isles.

His final appearance as President was seen during the "Icarus" storyline in "Furia and the Guardians". 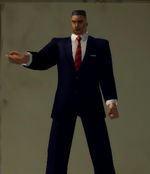 Note: President Obama is a public figure and is free to be used under current application of the Digital Millennium Copyright Act and U.S. judicial precedence. His appearance in any fan-made comic book, however, does not mean that the White House or Mister Obama has any knowledge of, endorses, or approves the use of such likeness.