Guardians of the Dawn GRADUATION

A comic series created by David 2 focusing on members of the "Guardians of the Dawn" supergroup in the City of Heroes MMO.

This series is a follow-up from the events chronicled in "The Guardian Powers" and the "Guardians of the Dawn 2012 Special". 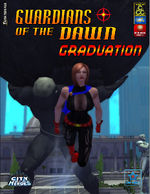 Summary: Professor Bart Wallace had gotten used to living a normal life in Paragon City when he is approached by a hero that he thought was also retired. Ryder Lightning is needed once again. But is Bart willing or even able to return to that life? And he’s not the only one coming back. The balance of power shifts in Paragon City in ways you will not expect! 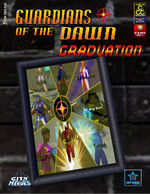 Summary: Ryder Lightning is back! After getting his new "sporty" look from Serge, Professor Bart Wallace has to sort through the changes made to the Guardians of the Dawn during his time away. This is certainly not the same base that he remembered! Nor is it the same team. New heroes have joined the Guardians, and they come with new attitudes. But at least one seasoned hero is suspiciously absent. Why? And who has Lord Geddy selected to serve as his "proxy" in his new role in the Bilderburg Alliance? 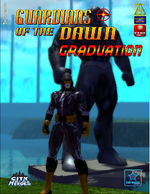 Summary: What happened to MidKnight X? What is causing him to attack Ryder Lightning? And if Ryder is not powerful enough to defend himself, who is able to help? And can they reach him in time? Plus, will Lexie Lothora take up Lord Lee Geddy's offer? And what did happen to Lord Geddy's assistant? And finally, what caused Icon Powers to leave the Guardians of the Dawn? And if Ryder survives the attack by MidKnight X, would he be willing to take Icon's previous position in the group? Answers will be revealed in the conclusion of this three-part mini-series as we set the stage for the next phase of the stories in the City of Heroes.

Note: This series leads into the one-shot special "The Libra Order: Debts of Honor" and the "Furia and the Guardians" series.