The Libra Order: Debts Of Honor

"The Libra Order: Debts of Honor" is a one-shot special set in the world of the City of Heroes MMO.

It parallels certain events seen in the "Guardians of the Dawn GRADUATION" mini-series.

The title is in reference to the "debts" left by certain members of the Guardians of the Dawn when they impersonated certain members of the villain group known as The Libra Order in "Guardians of the Dawn Spotlight" #17. Although one member of the Order tried and failed to get satisfaction, the other members were not able to follow suit until their patron - the cosmic force known as Libra - could authorize it in "The Guardian Powers" #8. 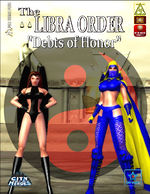 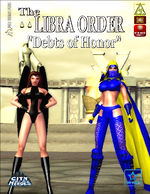 Summary: The mysterious group known as the Libra Order take center stage in this special as they show how their activities played an integral part in the events seen in the pages of "Guardians of the Dawn GRADUATION".

Note: Events in this special lead into the "Furia and the Guardians" series