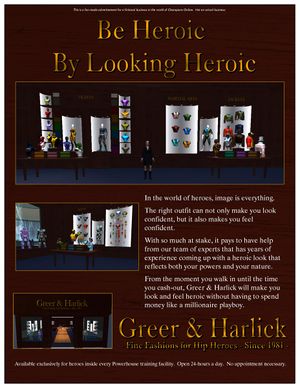 Greer & Harlick (or simply G&H) is the name of one of the prestigious tailor shops in the world of Champions Online.

Greer & Harlick prides itself as being one of the last and best haberdashery in the world, providing an old-world look and feel for heroes of all ages, genders, and species.

While there appears to be tailor stores everywhere, even on the moon, none of them can compete with the professional service provided in a Greer & Harlick establishment. Greer & Harlick tailors are the best at determining what outfit best suits who you are and what you can do, not only as a hero but also in a more business-oriented as well a casual setting. Their formalwear can never be beat, and they have the best seamstresses on-site to ensure that your attire fits you perfectly.

Changing rooms are available for those who desire privacy while changing their appearance. This is important if you want to maintain your secret identity.

Greer & Harlick was first founded in 1981, initially only in Detroit - now Millennium City - but has since expanded to have a branch store in every Powerhouse training facility around the world. If there is a Powerhouse facility in your area, you'll find a Greer & Harlick.

Greer & Harlick was first seen in "Future's Guardian" #1 as Galatea Future sought a chance of costume.