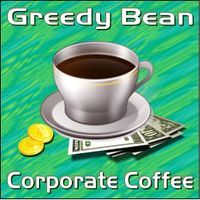 Greedy Bean Corporate Coffee is the biggest national coffee franchise and the virtually the only coffeehouse store in Paragon City.

Greedy Bean was created in 2008 as a pilot project by several major corporate investors, including Crey Industries, to corner the seemingly uncontainable market on coffee. The idea was to replace the various coffee houses with one franchise chain that would then be able to influence the purchasing of coffee, and thus be able to control the price of coffee.

The Greedy Bean franchise was marketed as "Cheap Coffee Quickly" and was designed for the on-the-go office workers and registered heroes. They avoided using the various gourmet blends and instead sold "add-on" packets which mimicked the taste of gourmet coffee mixes. This allowed coffee to be sold cheaper and faster than any coffee house ever could.

Critics were quick to condemn the franchise as a gross violation of antitrust laws, as well as to question the use of the "add-on" packets as a viable substitute for specialty brews. But those criticisms were quickly muted.

Several groups currently oppose the dominance of Greedy Bean in Paragon City. Most complain about the fact that workers are paid minimum wage, work long hours without being paid for overtime, and are not allowed to unionize. Unfortunately, their billboard and boycott campaigns did not put a dent in Greedy Bean's profits.

Greedy Bean was referenced in Issue #13 of the "Guardians of the Dawn Spotlight" series.