GodKiller is the name of a cybernetic bio-weapon designed to aggressively kill incarnate-level beings. More than just a "device", GodKiller actually possesses a living brain, albeit a partial one.

The device known as "GodKiller" was originally part of "Phase 2" of Lord Recluse's master plan to destroy Statesman and the other members of the Freedom Phalanx. The plan was eventually scrapped in exchange for another, but Recluse held on to the prototype as a contingency against the Praetorian Universe.

The "GodKiller" device remained in storage until a former lackey of the Goldbrickers was recruited on behalf of Libra to retrieve the device and bring it to Paragon City for further development. 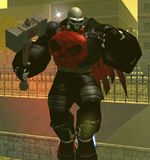 The device first appeared in Croatoa when it surprised and overwhelmed Galatea Powers. It was believed the battle was swift and severe enough to actually kill her, although it would later be discovered that she was rescued through the medical teleport system.

Goaded out for a second attack, Galatea Powers and Longbow Agent Romulus managed to successfully keep the device busy while a second team of Captain Paragonna and Lyon Powers located and disabled the operator, thus shutting down the device. The device is currently in Longbow custody.

According to Tainted Eve, now that this version has been defeated in battle, it would supposedly be more powerful in the next incarnation.

At the core of GodKiller is the partial brain and nervous system of a telepath. While most higher functions have been removed, the portions pertaining to telepathy and life support remain intact.

GodKiller functions as an extension of its operator. This is done through a psychic connection made with the operator that takes time to develop. Great concentration must be maintained for the operator to continue to use the device.

The resonators are powered by miniature Rikti core generators implanted inside both over-sized forearms. These are the same generators that power their rifles. The generators also give the device superhuman strength.

A third Rikti core generator is placed inside the giant red skull in its chest. This core generator powers most of the autonomous functions of the rest of the unit, allowing the device to walk and manipulate objects, as well as power a perception filter that blocks most senses until it is right next to its target. There is also a low-level electrical field that serves as modest protection. It also has jet-powered boots allowing it to fly.

To complete the offensive capacity, the GodKiller device has an enchanted war-hammer courtesy of the Mu Mystics. When properly wielded and energized by the electrical field, the war-hammer can break the bones of even the most invulnerable of beings.

The GodKiller device relies on stealth, fear, and overwhelming strength to overpower the enemy, break down their defenses, disrupt their concentration, and strike hard and fast before the target can mount any kind of resistance.

GodKiller and its operative first appeared in Issue #2 of "The Guardian Powers".