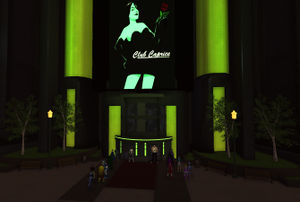 Club Caprice is a nightclub located in Millennium City in the world of Champions Online MMO.

It is considered a "superhero nightclub" but, really, anyone can be invited.

In 1995, the same year that Grond was created, a former villain named Lewis Frey decided he needed to do right after getting out of prison. The once and former "Masquerade" opened a club in the Renaissance Area of Millennium City, which he called "Club Caprice". The club was supposed to be "exclusive to Champions and heroes", as a place to go where heroes can just meet.

Sadly, this idea didn't hold up too well as the heroes were immediately suspicious of known supervillain creating a place "just for them".

So Lewis decided to open the club up for everyone, but with one caveat: everyone had to dress like a superhero.

The idea was a hit. Heroes and civilians would dress up in costume and nobody would be the wiser as to who was a hero and who wasn't.

Eventually the code was loosened a bit when it came to the new lounge area, which resembled a Roman assembly hall. But the dance floor section still kept the costume requirement until only recently. Heroes were finally open to the "hero's only" idea when an exclusive VIP area was opened up.

Club Caprice was first seen in "The Lost Adventures of Galatea Future" #4.

Starlett works there under the name DJ Risqué.

Markman Gold is often there to get new clients and to hassle old ones.