"The Expendables" is a series based on a group of "ordinary" people that operate under the same name. 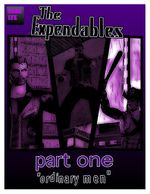 An old enemy is back, and he's ready to make a big impact on Paragon City! (Read)

Note: This series should NOT be mistaken for the major motion picuture or its sequel featuring the greatest collection of action stars ever. EVER!