"The Debater" is the name of a series featuring an otherwise ordinary guy who likes to argue. In fact he argues so much that he decided to make it his business telling other people how to live their lives.

Issue 01: A Foul Plot - It's The Debater versus Major Flanders Fried Chicken! (Read)

Issue 02: Official Superhero - The Debater finds out that his "debating style" needs to be licensed! (Read) 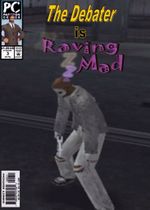 Issue 03: Raving Mad! - The Debater is sent to teach the youth of Paragon City that drugs and partying are bad. Will anyone stay awake to debate him on it? (Read) 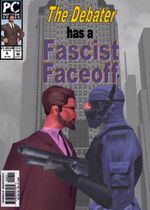 Issue 04: Fascist Faceoff! - The Debater versus the Fifth Column. We've heard that the pen is mightier than the sword, but is The Mouth mightier than The Gun? (Read)