Snaptooth is an in-game character in the now-defunct City of Heroes MMO.

He is one of several leaders of the Red Caps, a gang of evil elves that infest the woods of Croatoa.

But you won't find Snaptooth in those places.

Snaptooth is a masochist. He loves to be beaten up.

His fellow Red Caps won't help him. They think he's sick. Most people going to Croatoa stay away from the woods, so he won't get his jollies there. And the witches and warlocks and the mystical covens in Croataoa have developed spells that prevent him from going there to get beaten up.

So he had to invent new ways.

One of them is being contracted by Father Time to "kidnap" Baby New Year so heroes and villains can "rescue" him. In the process, Snaptooth gets his butt kicked, and he gets his jollies and gets paid.

When the "thrill" of that is not enough, Snaptooth threatens to disrupt events during the time around Valentine's Day. There he gets beaten up for free, which he considers to be payment enough. But he still has to make some money for the other Red Hats that are suckered into helping him.

Just because Snaptooth loves to get the crap beaten out of him doesn't mean that he's a pushover. He is insanely strong and durable.

He can appear weak, but eventually can power-up to his final form. Then he is difficult to overcome without help.

His primary weapon are his two oversized daggers, which he can wield with incredible speed and strength to inflict damage.

If that isn't enough, he also has arrows he can hurl from a distance. And on top of that, he can get a Red Hat suicide minion with explosives strapped to his back to latch onto his opponent's head and explode.

All of this is just to get you pissed off enough for you to inflict maximum pain and agony, which gives him pleasure.

Of course, as a mystical creature, he can't really die. So you can pound on him all you want and he'll come back for more.

Snaptooth's "dirty little secret" was revealed by Baby New Year in "Guardians of the Dawn Spotlight" #06. 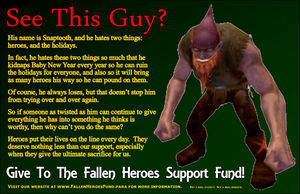