The purpose of the MMO Comic Index Content Ratings System is to provide an easy-to-understand comic rating system for fan-created content. This rating system will provide easy warning to potential readers on the content as well as allow the creators greater freedom over their content.

The Comics Code Authority was created in 1954 as a way to avoid government regulation of the comic book industry, which back then was wrongly accused of encouraging juvenile delinquency. Scathing biased studies published by self-professed experts such as Dr. Fredric Wertham painted even mainstream comic book characters in a bad light.

Fearing government regulation of the industry, the Comics Magazine Association of America created the CCA, which was patterned after a similar self-regulatory body for motion pictures. The Authority would use a stamp to show that each issue was properly vetted by an independent body based on the content and the message it gave. Often that message would encourage respect for authority, respect for the government, and that criminals never profit from their activities. It also prohibited acts of violence, gore, zombies, salacious behavior, and displays of nudity.

Many mainstream publishers abided by the rules of the CCA and would not publish an issue that could not get their approval, although there were several exceptions. Starting in 2001, mainstream publishers began abandoning the CCA for their own rating system, or abandoning the rating system entirely. In addition, publishers realized that graphic novels did not require CCA approval, so stories would be published as graphic novels that would not otherwise be published in mainstream comics, and to do so without any kind of advisory message.

The Comics Code Authority was officially discontinued in 2011 when the last of the publishers, Archie Comics, abandoned the practice.

Note: The Comics Code Authority and its stamp are now owned by the Comic Book Legal Defense Fund.

The approved content ratings are based on several mainstream ratings system, including those by DC Comics and Marvel Comics. (Click on the images to download the large-sized files.)

Appropriate for readers of all ages, including and especially for children. May contain cartoon violence and/or some comic mischief.

Appropriate for readers age 12 and older. This is the average content level for MMO games. May contain mild violence, (bleeped) language, and/or suggestive themes. This can include punches, suggestive attire, sorcery, zombies

T+ for Teens Plus

Appropriate for readers age 15 and older. May contain moderate violence, mild (un-bleeped) profanity, graphic imagery and/or suggestive themes. This can include showing blood, non-full-frontal nudity, references to mature themes (but not actually showing it), amputations, death

M for Mature Only

Appropriate for readers age 17 and older. May contain intense and gory violence, extensive profanity, graphic nudity, sexual themes and content, and other content suitable only for adult readers.

The MCICRS is a voluntary ratings system. It is entirely up to the comic creators themselves if they decide to use this system for their works.

To use, choose the general rating that you feel your comics would fall under.

Click on the rating image to see it full-sized, then add it to your computer. The images are large, but they can be reduced so you can include them on the cover.

The MCICRS image needs to be placed somewhere on the cover of your publication. There is no set size or amount of space on the cover that it needs to occupy, only that it can be viewable by the reader.

The following comic creators/publishers have signed on with and are using MCICRS: 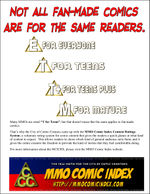