Christopher "Chris" Jenkins is an attorney in the now-defunct City of Heroes MMO.

He is a slimy ambulance-chaser who made his money suing heroes and hero groups, often for the publicity.

Chris Jenkins is the grandson of Marla Jenkins, who previously was the superhero Madame Danger. Madame Danger worked with the legendary Statesman early in his career and was a good friend, although not willing to be part of a larger group like the Freedom Phalanx. Still, Statesman respected her decision, and she eventually retired when her powers began to fade.

But not just any lawyer. One that had a mad-hate for heroes and wanted to make a name for himself by suing every hero he could find. So that's what he's been doing.

Sometimes it would pay off. Like when he sued Manticore and got a huge stinking settlement for the injured party. Of course, he has to "keep it quiet", but he still brings it up every so often.

Other times, he would have to work for that settlement money, which is what he really wants, because then he gets a percentage. He'd rather settle than sue, because even if he wins in a case, often the judgement isn't worth the hassle. Then it's a matter of publicity for him. If he pushes for a trial and goes to trial, it's because he wants the publicity.

There is no word whether or not he knows that his grandmother was once a hero. But there are plenty of people that would love to be a fly on that wall should it be known.

Chris has no power other than the infamous "power of attorney".

Chris Jenkins is slime. He's looking for a paycheck at every opportunity.

Chris was seen a lot in billboards in Paragon City, and his grandmother had no love for him, but he was never an in-game character.

He was referenced in "Guardians of the Dawn: Graduation" #2 as the reason why KDave was kicked out of his first hero group.

His first appearance was finally in "Task Force Twilight" #1. 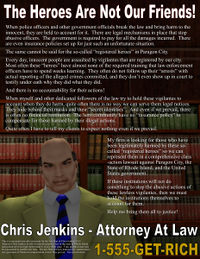