Burt Jackson is a tough-talking truck driver in the world of Champions Online MMO.

Burt Jackson is a truck-driver through-and-through. He lives to haul and he loves to talk. He's one of those guys who thinks he knows it all.

He is a truck driver by trade. It's really all that he is good at doing. He likes to think that being a truck driver makes him a master at everything else. It doesn't, but good luck trying to convince him of that.

Burt loves to talk. You can't shut him up, no matter how hard you try. He will talk endlessly about his ex-wives and why he needs to haul loads to pay for their alimony (which he doesn't pay).

Burt fancies himself as an action hero. He's not really good at it, though. He has to be rescued by heroes, which is why he finds himself in Millennium City, hanging around a bar notorious for gang activity. He gives tips to heroes in the hopes they will help him get his truck back before his exes find out where he is.

In Issue #11 of "Future's Guardian", Burt tries to give some help, or at least some advice, to a telepathic supervillain named Malizia. She ends up psychically lobotomizing him.

It was temporary, though, and Burt was soon back on the street corner spouting free advice and bad sayings.

Burt may not seem like much but he does have one thing that he's good at, and that is reflex. He has great reflexes.

His truck is called The Pork Rind Express.

Burt Jackson is full of himself at all times. He always has some quick slogan to recite or some self-made philosophy to quote.

(See his entry in Champions Wiki for more information.)

Burt was seen briefly in "Future's Guardian" #11 before getting himself lobotomized by Malizia.

He is a parody of Jack Burton, played by Kurt Russel in the 1986 movie "Big Trouble in Little China". 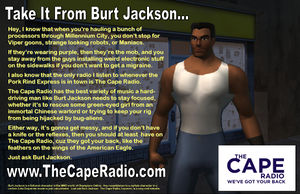