Battle Bovine is a series that follows the comedic exploits of Battle Bovine, a cow of a hero and a member of the Liberty League. 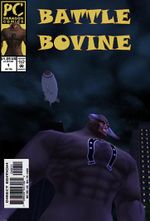 Follow Battle Bovine on his first day as a hero. 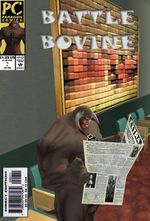 Battle Bovine has to take a physical before he can start his career as a hero. Will he find the right kind of doctor? 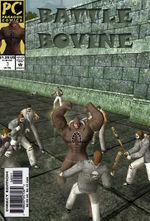 Battle Bovine gets his first mission! 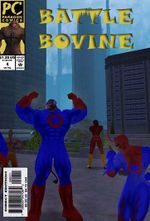 Battle Bovine has to re-apply for his hero license, and he ends up getting drafted into the Liberty League.

Special guest appearance by The Weevil. 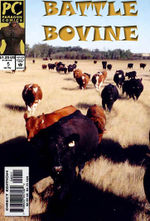 You asked for it! Battle Bovine finds his father, and his origins are revealed! 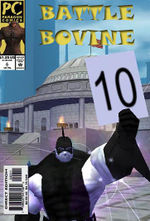 Trouble comes a-calling for the Combative Cow... and his name is "Dances With Bulls"! 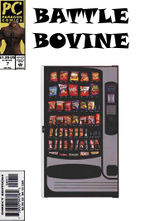 It had to happen... Battle Bovine versus his arch-nemesis... the Candy Machine!

And it won't end well for someone! 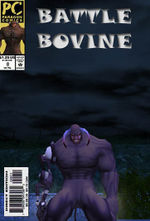 Badly wounded from his battles, the fighting cow struggles to keep going. 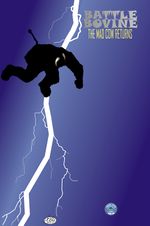 A fan has a special gift for Battle Bovine. But is it something he'll regret later? Oh come on, you should know better by now! 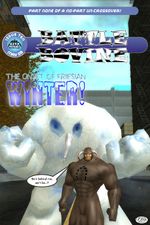 It's Battle Bovine versus... the Winter Monsters! Anyone need frozen steak? 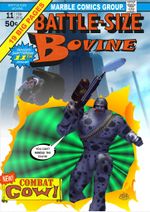 It's Battle Bovine versus the most despicable of enemies... COPYRIGHT LAWYERS! Hopefully he'll have a good attorney so he'll... oh, nevermind. 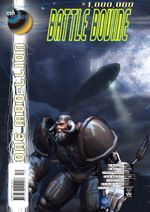 There's something inherently wrong with this issue... can you guess what it is?