The Spectacular
Arachnoman
Webbed As A Spider 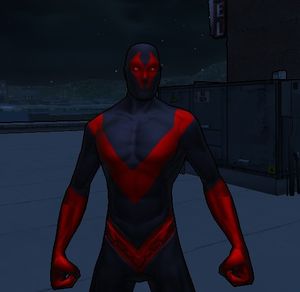 "You gotta take a nice choice! Rather than be a freaking dumb!"
Freeform
Player:

"You're just wrong after all.."

it was then Arachnoman was born as the superhero and swear to be the superhero Arachnoman, Mark is still alive and Mark is in hunt on Austin. Austin still work like the same job as Arachnoman and Austin Baker. Austin also met great friends too. His father also told Austin that "With Great Force Comes Great Freedom" Austin always care about it and learn it. 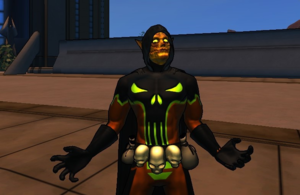 "HAHAHHAHAHAHAHHAHAHA YOU'VE THINK THAT YOU BEAT ME SPIDER!? WRONG!"

Mark Jones was born in Vibora Bay, Queen City. Mark lived before with his abusive parents. Were his father beat him for sleeping in class. When Mark Jones was locked him his own room, it starts to rain with thunder, and he was scared that his light was off. He saw in his astral vision, in something-like amnesia. Saw three demonic colored like, crimson, yellow, and cyan, but it was one whos colored orange. That one was his favorite to stay with. Forever. That when his parents started to be spoiled on him, since he show them how psycho and mad can he be to show his new friend, which was very odd that they could not see the friend he talked about. His parents are rich that his father build a company called Mark Corp. He was happy with his demonic friend that he's famous, when he grew up that his parents died by an cancer. He took the legacy of his own father as the new Mark Corp in 2001. He begin to become rich, and rich, and rich, and rich. He become famous. After the demonic friend tricked him and used him as a dog. The demonic friend destroyed his dream, that when he got a wife and married in the company front of her family, Mark's family and other scientist and his friends and allies was there and was glad to see their marriage. That's when it happen that Mark got a son named, Eddie Jones. Who eventually became bestfriend with Austin Baker, as the Arachnoman. Mark Jones was hateful on Arachnoman that he got so many fans. Mark was meeting the general who leads the soldiers, talking about the machine they are creating, general was wondering to use some of Mark Corp's various of weaponry to build a power armor in Millennium City. Mark Jones accept it when he was mad, the scientist helper was coming to help and took an unknown serum. He test it in the machine of smoke, cause him to be mad and crazy. When he woke up and killed him, gained him super-strength. Mark Jones killed his wife last night while Eddie was in sleep. When some battle suit wasn't ready yet. He create his chest and mask and getting a cape into a demonic ways. Creating various of gadgets with grim bombs and devil-glider. He then had some private talk with other leaders but the one leader of all said he want to sell this company. This cause him to think in the party in friday at Mark Corp; he flying there and used his grim bomb into some incendiary day, killed some of the leaders that cause Mark Jones to have the name. Incendiary Demon That when Arachnoman swung attack at Demon, he saved Felicity from falling down. Mark Jones was speaking with the demonic friend what to do. Is to kill Arachnoman's heart. Mark scared Austin's mother in her room by sleeping. Austin then swing and meeting the fight of a hero between Arachnoman and Incendiary Demon. Arachnoman hold Felicity and in midnight by rescuing thirteen children and four teachers on a car they were close to fall down into the sea. He saved them and then Mark pull him into a old place were Arachnoman and Incendiary Demon fought. When Austin got pissed off. Austin smack the hell out of Mark before showing his secret. Mark tries to throw some bombs at Austin by his devil-glider, but Arachnoman's Arachno Sense starts to warn him danger, cause him to take a backflip and swung back before it begin to explode, Austin and Eddie was believing that Mark was dead but it was a fake one, due to Mark's healing factor cause that to be an Apparent Death. Mark is alive and still is living in a hotel of Vibora Bay, his Devil-Glider now can drive fast to Millennium City and still continues to be an arch-nemesis of Arachnoman's! 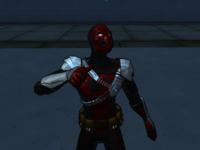 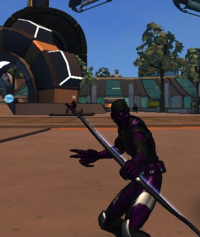 Shadow of Terror are a villain group that want some vengeance due that Arachnoman arrived first by stopping them. Now and some of Arachnoman's Villains, made a Supergroup as a terror of the Millennium City and attempting to mess up with the Arachnoman! 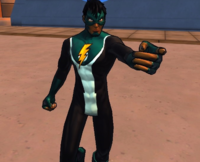 He always taken too serious with business. John Hart was known as a slacker who doesn't care or miss people, average and sometimes dork, John now lives in Westside. John spent his time to granted more time on fixing computers in his own ways and keeps being slacker. After his father's death and his mother is keep dealing drugs; and had one blond girlfriend named Alexandra Jane. Who mourns John from his father's death and having family business. That day when an thunderstruck blasted John when he were in the computer, particular John. Woke up and walked to the hospital in Millennium City. It manifested his abilities that gained John the ability to manipulate or control electricity. So far the electricity of the power brainwash. To be insane and crazy to be hated of Arachnoman and Killer Spider that made his own costume, taking as the villains list wanted. Named the villain Black Thunderer! Possessed now Super-Strength!! 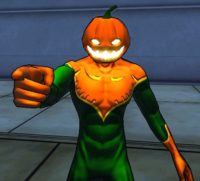 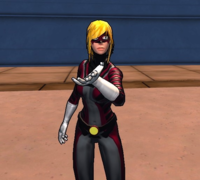 The girl that loves throwing stuff, as such as throwing boomerangs. Carol Laughton was slacker that loved making trouble. Her mother was an soldier. When she passed away. Carol trained her various skills such with dodge from any punches. Carol love so much Arachnoman when she saw on the news reports. She created an makeshift and some various old boomerangs she lefted at the age 6. When she was in an deadly death match, Arachnoman rescued her and warned her to stay away whatever she is trying to become, shouting at her. She swear that he will pay for the punishment to warn Carol. She trained again but better that gain her better physical strength, little about to find a way to escape. And her very own martial arts skills. Made plenty boomerangs, and an leather spandex suit to flirt a bit. Taking the name as the Ricochette; The Lady Boomerang! 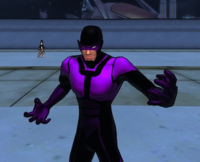 Unknown mister who works for Argent, to get paid and spy on others. In addition to providing the code name before; Agent P. Known to used it before, when ARGENT and VIPER did some work together to build a battlesuit, which was a power armor. They were thinking what they can use as a piece of equipment that, rhino horn. Use weapons to kill the Arachnoman, as the next overpowered the Spider man. Now that took the name Rhino Power! And he's twice as powerful now! Tweaking things what he's wearing. ...

The Ant, The Stinging Bug: 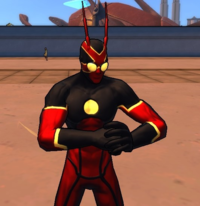 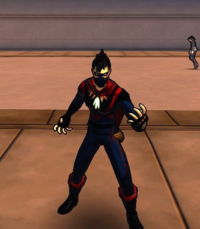 Forceline, The Force of Destruction:

((Give a comments to this heroic spider!))