Antonio Nash is an in-game character and branch director of the Genetic Investigation and Facilitation Team in City Hall. 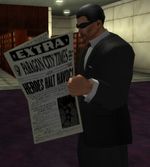 Antonio Nash is a former gang member whose mutant ability to solve any mathematical problem made him perfect for his job in the Department of Defense. But he could not ignore the plight of the city he called home, so he requested he be transferred to the Federal Bureau for Super-powered Affairs, where he began to help out other mutants in cleaning up the city.

He also hates being called "Tony".

Originally seen wearing casual attire at all times of the day, Antonio has recently decided to live up to the title of G.I.F.T. director by wearing a suit.

Antonio Nash appeared in Issue #15 of the Guardians of the Dawn Spotlight series as the first contact for newcomer hero Pyrogurl.