Sovereign Insurance is an insurance company in Paragon City that specializes in insuring lending institutions from criminal acts. Their offices are located in Kings Row across the parking lot from Police Headquarters.

Initially started as a life insurance company, Sovereign Insurance made their mark during the Great Depression by offering insurance coverage to banks. Although the then-newly-formed FDIC covered accounts up to $5000, mills and factories were still hesitant to leave money with the banks due to the rampant robberies. The additional coverage helped build confidence and aided in the overall recovery of the city.

The company adopted the slogan "We'll be here for you, so you can be there for them." 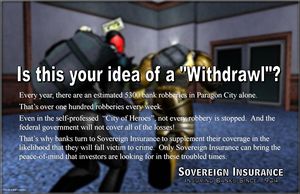 Sovereign Insurance recently garnered some criticism for their ads claiming that banks in Paragon City experience more robberies than any other city in the country.

Criminologists and officials from the Federal Bureau of Investigation strongly refute the claims made in the ads that Paragon City experiences "over 5300 bank robberies" per year.

Sovereign Insurance was mentioned in Issue #4 of "The Guardian Powers" series.