Madcap Mangler is an extremely disturbing creature. "So let me get this straight. This guy shows up, surrounded by thugs. They are all armed with guns and he has two. It appears he can extrude poisons and whatnot from out of his mouth. He has been horribly torturing and killing anyone he comes across. Hold-ups at banks, jewerly shops and all those kind of places and leaves behind a bloodbath, corpses so shot up and beaten and tortured that it looks like they were mauled by a bear. He even appears to eat parts of many of his victums and your saying this psycho still hasn't given himself some kind of name or something like "Recluse" or "Bloodbath"! Guess it's up to us. Let's see... how about Madcap? What?! Its taken. Let me look at that list. Hm... okay... Madcap Mangler isn't taken. Use that for the front cover. Now get back to work!" -A Paragon Times Editor. 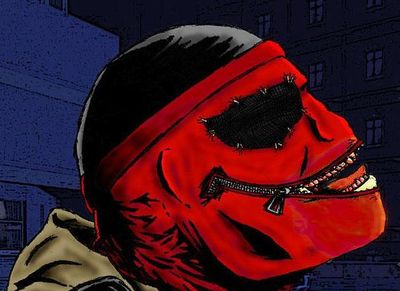 Madcap is silent. While most would agree he does not communicate, at least through speech, he does appear to understand others. On certain occations Madcap has appeared to understand more languages and forms of communication than just english. This leads Sin Stalker to be one of the few who believe Madcap is a highly intellegant individual. Possibly a genius.

His eating habits are strange to say the least. Most would say disgusting. Raw. Madcap enjoys human flesh although he has been seen digging his teeth into the side of a dead dog or other sort of animal when human is temporarily unavailable. He is seen all the time reaching into his coat to pull out severed human fingers and eyeballs which he keeps with him as snacks. He rarely pulls out a toe.

Madcap Enjoys Pain. The sensation of inflicting pain. He is not known for murder, rather his victums ultimatly die due to the injuries Madcap inflicts but he inflicts to cause great pain, not death. He still does appear to kill without remourse aswell though. Sin Stalker, his arch nemesis, believes Madcap not only enjoys inflicting pain but enjoys feeling pain as well.

Madcap's obession with pain has lead him to target one hero more than any other, Sin Stalker. Sin Stalker has the ability or curse to sense the pain of others. He has a psychic ability to sense emotion where pain seems to be the dominant feeling cast out by the world. Mainly believe Madcap wishes he had the power Sin Stalker does.

Madcap Mangler has the ability of Poisons generated from his mouth and throat. These Poisons come in different forms from generic poisons to super poisons to acids. One of Madcap's poisons effects the mind and has addictive properties. Those that follow Madcap Mangler follow Madcap with blind obedience as they are extremely addicted to this "Mangler" drug. They have banded together calling themselves the Manglers.

Like his nickname, Da Mouff talks alot. He has call it upon himself to speak for Madcap as Madcap never speaks or is unable to speak. He talks alot of crap and noone knows if he is truely saying what Madcap wants or if Madcap just goes with it as a form of entertainment. Da Mouff is one of the oldest members of the Manglers.

The youngest member of the Manglers, he takes partying as a lifestyle. With many fake I.D.s, he always finds a way into the bars.

Happy Jack getting out his TNT!

A sterotype if you ever saw one. He is a pure pryomaniac before Madcap's mangler drug. Now, completely drugged up he is a sterotype of a sterotype.

Macap Mangler's most notible power is difficult to sum up but the closest title would be Poison. From out his mouth he sprays all different types of substances, not just poisons but acidic compounds and hallucinagins. His salava is filled to the brim with acids and bacteria.

One substance differs from all the rest and shows that Madcap has a very complex control of these compounds. Its nickname is Mangledine and its rumored to be 100x the strength of Meth. This would make it the most addictive substance known to man. It is with this that he brings in more of his "crew". So far no ill side effects are known besides slight paranoia and the deadly withdraw someone goes through without another fix. On the plus side it appears the user gains increased strength, speed, agility, muscle mass, and energy.

Madcap and the Manglers all carry a large arsenal of handguns from pistols to automatics and semi-automatics. The Manglers are ready for trouble at a moments notice.

Madcap himself always has at least two semi-automatic weapons on him at all times.

These powers are suspected, mainly by Madcap's archnemesis Sin Stalker, but there is yet no evidence to back up these claims.

While there is no evidence to this matter, Sin Stalker believes Madcap to have regeneration as there have been several times where Madcap has appeared to have died and yet he always manages to come back.

Sin Stalker suspects that Madcap has increased or added senses that allow Madcap to see in the dark. He also suspects Madcap to have an increased sense of smell and hearing.

Madcap Mangler has so far had two appearences in the Justice-Knights comic book series. In issue 1 and issue 3.

They can be found here at:

Currently, Madcap is not set to appear in any upcoming issues, so far.