The Mad Mummy was just an ordinary mummy, full of death until that one fateful day. Now, his past in the shadows of a bright, new future, the Mad Mummy, seemingly unable to die, patrols the streets of Paragon City alongside Sin Stalker and the Justice-Knights, fighting crime as a mostly-silent hero.

The Mad Mummy never told his tale to anyone else after his awakening except to a fellow Justice-Knight named Hell, who happens to be the only person who understands what the Mad Mummy is saying (due to the Mad Mummy’s limited English vocabulary). Hell promised the Mad Mummy that he would never speak about the Mad Mummy’s life to anyone else unless Mad wanted someone to know. Mad only released his former name before he was resurrected: Celcius Ankhas. The Mad Mummy has not released any further information regarding his past life, although his proficiency with bladed weapons and vigorous training exercises suggest he was involved in some form of militaristic association.

Sin takes the mummy through various testing and training grounds, training the mummy to become a hero. Seeing as he is already dead, the mummy does not attempt to dodge attacks, discovering that he can regenerate at an abnormally fast rate. It is at that point the mummy gains the nickname of the “Mad Mummy”, as he attempts deadly aerobatics and fighting styles.

The Mad Mummy also discovers he possesses unnatural speed and reflexes, making him fast, both locomotive and reflexively. The Justice-Knights’ weapons-smith fashions a khopesh and sword out of the best blade metal for Mad, in which Mad shows Sin Stalker his skills with the two blades. After much rigorous training, the Mad Mummy is officially inducted into the Justice-Knights, at which point Mad reveals to Sin his original name: Celcius Ankhas. Because the Mad Mummy was fast on his feet and virtually undetectable, he is ranked as Captain and as the Justice-Knights’ Lead Reconnaissance Hero (unofficially).

Mad becomes best friends with Hell, since Hell is the only person who could understand what Mad is saying and because Hell is trustworthy enough to keep secrets.

The Mad Mummy’s increased speed and reflexes make him faster than stronger. Mad will deal many medium-sized to low-sized attacks at one time, quickly weakening the enemy for the final blow.

Mad Speed: The Mad Mummy is endowed with inhuman speed when awakened. In the Justice-Knights, his speed is almost unmatched.

Mad Reflexes: The Mad Mummy is endowed with enhanced reflexes when awakened. The Mad Mummy can sense an incoming punch as soon as the enemy’s mind formulates the motion in his head.

Mad Regen: The Mad Mummy is endowed with unnatural regeneration when awakened. The Mad Mummy’s wounds heal half as fast as they are inflicted.

Mad is a master at the art of the dual blades, a hint to his past life. Combining his skills with the khopesh and sword with his newfound power, his two deadliest moves are:

Blurred Blades: The Mad Mummy can use his blinding speed to whirl his blades, creating a vortex of death.

Silent Knight: The Mad Mummy, using his speed and reflexes, can stealthily take out his enemies with one, quick blow. 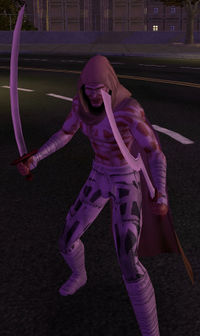 The Mad Mummy uses a combination of his newfound powers to create:

Mirage: Using his super speed and reflexes, the Mad Mummy could appear as just a blur from the corner of your eye, making him almost invisible to the enemy.

The Mad Mummy uses an Egyptian-styled Khopesh blade and unique sword that is something out of a fantasy.

The Mad Mummy uses no equipment to travel, just his speed.

The Mad Mummy is only weak to the power used by his nemesis, the Summon Shade.

The Mad Mummy only has one nemesis at the time: the Summon Shade. 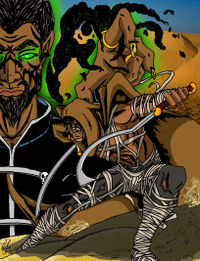 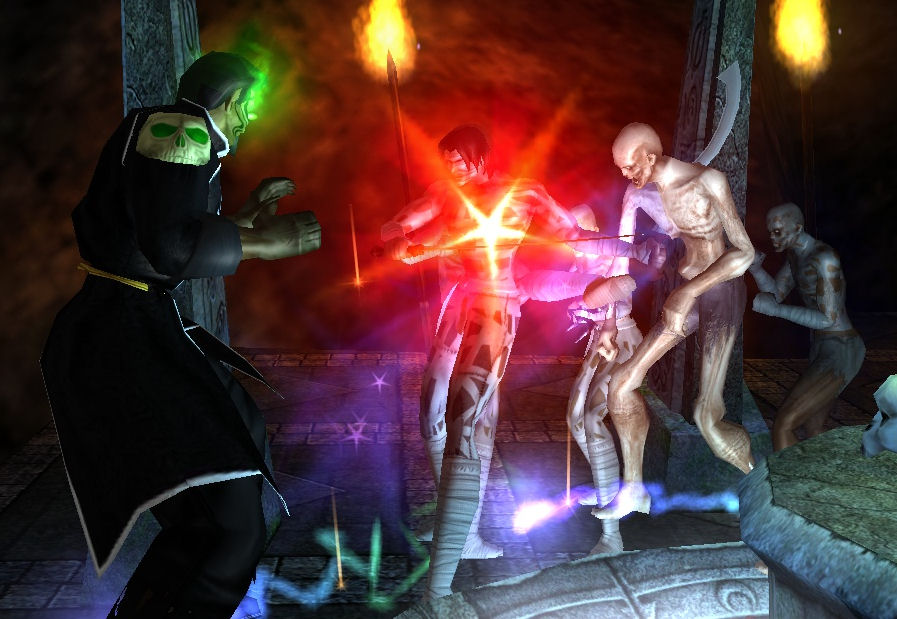 Coming soon to the City of Heroes Mission Architect Database:

Synopsis: Help the Justice-Knights stop the Summon Shade from robbing the Paragon City Museum of Natural History and learn about the hero, the Mad Mummy!