Bugg is a insect-themed teenage hero who operates in the world of Millennium City within the Champions Universe. Real name, Jimmy "James" Tyler he first started off as an average teenager struggling to live in a world where super-villains send superheroes through office buildings and destroying half the town. When Jimmy is stung by a Qularr Firebug during the Qularr Invasion he goes many months dealing with painful symptoms like, achy bones, sweating, and blackouts, after finally healing Jimmy notices he had gotten super powers after almost getting hit by a truck and jumping out of the way only to find himself stuck to a building.

Jimmy originally plans to use his new powers to go sign up for wrestling, but that was soon scraped when he used his new powers and insect-themed costume to save his school from a destructive monster calling himself, Morbane. Quickly defeating him Jimmy soon changes out of his costume and gets back to school, his actions as the new insectoid hero were printed in the newspaper the next day an unfortunate mistype on the word "Bug" allowed Jimmy to become a superhero naming himself, Bugg, with two g's.

Within the DC Universe lies a different Bugg. This incarnation of the Winged Avenger is still James, but instead of a insect-themed powerset this one is in fact a shape-shifter connected to The Green, an elemental force which connects all forms of plant life on earth, experienced by elementals as an ethereal realm inhabited by the collective minds of the Parliament of Trees. Bugg in this timeline is one of the new heroes out to stop Brainiac from killing all the heroes within the DC Universe. Jimmy in this universe is also younger than his Champions counterpart, he is 12 years old, but has the strict attitude of an adult. 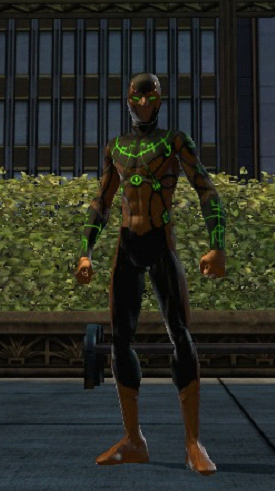 Bugg in the DC Universe

NOTE: These are the PaA for DC Universe Bugg.