Ascendant-O's is a fictional cereal product in the City of Heroes MMO. 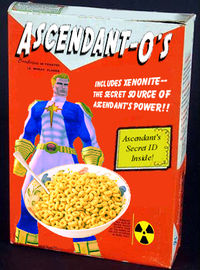 A rare box of Ascendant-O's.

It is the creation of Saul Rubenstien, the agent, manager, and uncle to Ascendant, who hoped to cash in on Ascendant's heroic career with merchandising.

Ascendant-O's was designed to be "delicious, nutritious, and super-charged". In reality, it is your typical sugar-coated corn-meal shaped in X's, only sprinkled with the rare element Xenonite.

The cereal failed on several levels, though.

First, the overhead price of each box of Ascendant-O's skyrocketed with the addition of Xenonite. Because the substance is extremely rare, adding it to breakfast cereal made the per-unit price reach as high as $5000. Rubenstien said that he could make up the difference in "overseas shipments".

Second, despite as being marketed as "Includes Xeonite - The Secret Source of Ascendant's Power", in truth, Xenonite is Ascendant's weakness and can not only take Ascendant's powers away, it can also ultimately kill him. So children around the world would be eating cereal that would be fatal to Ascendant.

Third, the inclusion of a rare radioactive substance to breakfast cereal is a serious health risk to consumers. The bag containing the cereal had to be made of lead foil, which added to the already-astronomical price-per-unit cost. And despite the disclaimers on the box of the risks of consuming such breakfast, the U.S. Environmental Protection Agency along with the Food And Drug Administration refused to allow its release.

Fourth, the cereal box itself ended up being a rip-off of other branded cereal products, including "Hero-O's". This can be seen with the appearance of O-shaped cereal on the box, even though the actual cereal is X-shaped.

And fifth, the box promised "Ascendant's Secret ID Inside!" However, this ended up being a piece of folded paper with a random name created from a name generator program. This was the one and only positive mistake for the product.

Ultimately the cereal project was stopped and the whole supply was stored away in sealed lead-lined crates until the EPA can figure out how to dispose of it all safely.

Unfortunately, several crates have been reported missing. Where they are remains to be seen.