WSPDR is the call-sign for the sole TV and radio station for the Rogue Isles in the now-defunct City of Heroes MMO.

WSPDR Radio first began broadcasting in the 1940's under the banner of "Rogue Isles Radio" or simply "RIR". The signal was weak and sometimes did not make it through all the Isles. Plus, it was not on all the time. When it did broadcast, they often played recorded sea shanties and provided occasional weather and news reports. Ships that passed near the area dubbed the station "Pirate Radio". It did, however, play a minor role in helping provide news about hero activity during the last half of World War II in cooperation with WPGN Radio.

In the 1950's President Gerald Marchand invested heavily in "RIR" as a way to communicate with the Isles. He helped the station get better broadcasting towers, generators, and even sought professional talent, which often included broadcasters from America that were "blacklisted" by McCarthyism. The station was not only broadcasting 24-hours a day 7 days a week, but it was even strong enough to be heard in parts of Paragon City at night. Marchand even began experimenting with television broadcasts.

After the assassination of Marchand and the takeover of the island by the criminal terrorist organization known as Arachnos, Rogue Isles Radio was renamed WSPDR and was forced to air propaganda messages. In the 1970's, WSPDR also began broadcasting television signals. In the 1990's there was talk of converting the broadcasts to cable, which was reflected in the more "advanced" parts of the Isles such as Cap au Diable, Port Oaks, and Grandville.

During the Rikti Invasion of 2002, a backdoor channel was open between the Isles and Paragon City through their respective media services to provide joint information about the Rikti through the newly-created United Nations global defense force Vanguard. This allowed WPNN and WSPDR to share news stories and allowed their reporters to provide content for the other stations. This backdoor partnership continued until December of 2012, ten years after the invasion. 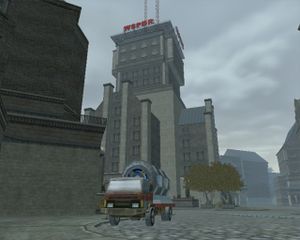 The broadcast facility for WSPDR is located in the Old Haven district of Cap au Diable. Although the outside facility has not changed, the interior has been updated to include advanced broadcasting facilities.