John Ronson was a normal man, traveled the world, and the whole USA. He was a timid man, and frequently got mugged on his travels to larger cities. Following his departure from the train in Paragon City, Rhode Island, he was mugged by members of the gang, The Hellions. The next day his rental car was pulverized by a Super Hero battle. And then his job of 14 years fired him over the phone. Looking in the local paper, he saw an ad. "Do you feel like your insignificant? Join the Arachnos Corporation, where power can be yours now!", he promptly signed up. Becoming an Arachnos soldier, he was given power beyond his wildest dreams. But alas with power comes great EGO! Stealing plans for Assault Robotic Units, he left the corporation, and built a personal army. He vowed that day, to have his revenge upon the world and all who have done him wrong! Joined by his wife, and her personal army he built for her, he currently leads the Death Dealers VG.

Soon after coming to the Rogue Isles, TechSpider joined up with a group called the Death Dealers. An offshoot clan of villains from the hero group, also called the Death Dealers. TechSpider proceeded to upgrade and build the groups base of operations, only to have most of them abandon the group and leave the city and the isles. Leaving TechSpider as the supreme leader of this VillainGroup. Rebuilding it, with the likes such as Evil Malibu Barbie, Mistress Arachnae, and his co-leader Knight Winds. The Death Dealers became a new(old) group to be recognized. 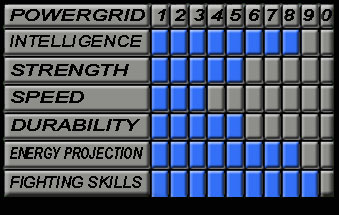 Without his 'bots', he is still a rather weak individual, hence the wearing of armor. Strip him of his army, and he can defeated rather quickly.

This comic and others can be read at http://www.kkcomics.com