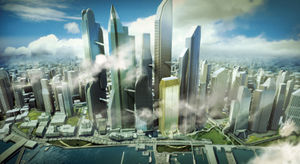 Millennium City in the world of Champions Online

Millennium City is the central city in the Champions Online MMO. It is also the starting point for all players in the MMO whether or not they take the tutorial.

Millennium City is a city built from the ashes of another.

In 1993, Doctor Destroyer destroyed the City of Detroit using space-based weapons and meteors. The devastation and the subsequent fires and looting that followed forced many of the surviving businesses out.

But the survivors of Detroit, especially the various heroes that risked their lives to stop Doctor Destroyer, refused to allow Detroit to stay dead. They put their efforts into rebuilding the area and forging a new city. A city for the new millennium. Millennium City.

The Renaissance Center is the starting point for visitors. It is a place designed exclusively to the heroes, where heroes can meet and socialize. It is where one would often find the city's premiere hero: Defender. It is also the location for the Powerhouse resource center, where heroes can upgrade and hone their abilities as well as make changes to their appearance. There are also open-air tailors, trading centers, invention stations, floating billboards, bank storage, a nightclub, and a docked "blimp".

The "Ren-Cen" is also the place where many of the big celebrations go on such as the Anniversary celebration and the Winter Event.

Westside is located due west of the Renaissance Center. This is the first location that heroes are sent to after training. It is a gritty area where gangs and hoodlums run rampant. The jail is also located there which means the area is plagued with frequent jailbreaks and escaped criminals.

The docks also have a few good places for heroes to meet and converse, just as long as you keep an eye on the gangs.

The functional heart of the city is located due north of the Renaissance Center. City Hall and the subsequent city offices are found here. Although the streets are cleaner and the businesses more upscale, crime is still rampant and gangs still bully their way.

Located due east of the Renaissance Center, Downtown is where Corporate America has taken hold. Key buildings here include Champions Headquarters, U.N.T.I.L. headquarters, Harmon Industries, Chinatown, and the Battle for Detroit Museum.

Millennium City was first seen in "The Lost Adventures of Galatea Future" #1.