Where did the Major Deej Universe begin from?

How is it compared to our universe (Alpha-65-Omega)?

What are the stories of some of the greatest characters and events of this universe?

These and many more questions will be answered in these pages.

THE MAJOR UNIVERSE: HISTORY IN THE MAKING 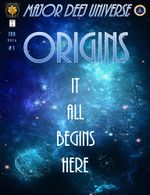 PREMIERE ISSUE! "It All Begins Here".

What IS the Major Deej Universe? How was it formed? What is different about it as compared to other unique and 'marvelous' universes? Who are the heroes of the age? The villains? Are there any aliens involved? What about magic? Crime gangs? 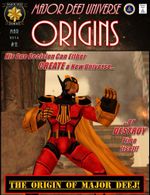 "THE ORIGIN OF MAJOR DEEJ" PART I

Who is Major Deej? Why does he have a whole universe named after him? What makes him a superhero...or is he one? Part I of the Origin of Major Deej starts here!

NYPD Police Officer Yorke survived what should have been a gruesome death, now, as SERGEANT Yorke of the PPD's new Special Tactics Division, everything should be coming up roses, right??

Meet Yorke's family, his doctors and the police commissioner and see what each one has planned for our intrepid hero! Also, the Special Tactics Division goes into action, but will Yorke's new unit be a kinder, gentler means of fighting crime...or mercenary in nature??

All this, plus a heart-stopping revelation that might shake Yorke to his very soul!