Kimaliya Wolfe is a character in the world of the City of Heroes MMO. She is currently an image consultant for LexieTech Incorporated.

Kimberly Aliya Wolfe is one of those “celebrities” that manufactured their fame.

Her father was an attorney who made his wealth through defending certain “made” clients, including corporate criminals and studio executives and Hollywood bigwigs. But he was legitimate, so he kept all the money that he made. When he died from a heart attack (no, really), Kimaliya inherited almost all of it. She got it because her mother would otherwise spend through it all.

Kimaliya made friends with the children of famous people, so that made her famous too. Pretty soon she was making a living going to nightclubs and fundraisers just to be “seen”. Nobody knew why she was "important", just that she was. "Just cuz", they would say.

At age 19, she met her “true love”. Sure he was eighty years old, but he was filthy rich and he could use the company of a busty brunette who knew something about having money. They were married and had the time of their lives… until he died six months later.

The official cause of his death was heart failure. But even though he had a pre-existing medical condition to validate it, his children from his previous marriage claimed that Kimaliya killed him for his money. They continually hounded her both legally and in the media about her relationship with him and with her previous boyfriends, chasing her almost ito being a recluse. They chased away her “professional career” of “being seen”, forcing her to rely more and more on her inheritance from her father, which was drying up, and they tied up any money she would get from her late husband. 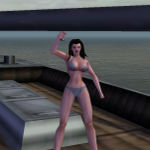 Kimaliya Wolfe in one of her many "arranged" photos

Kim started her own website, which really didn’t make any money until she started showing more of herself than the tabloids could publish. Then she realized that she could make money off desperate men online. That helped her for a little bit, but she still missed the rush of fame.

That’s when she had a “phenomenal idea” to pose for Glam Bunny Magazine. It got her the attention that she wanted… and then some.

So she went where all scorned and abandoned people would go.. she went to the Rogue Isles.

She dropped off the tabloids and the society gossip circles for a few years. There were rumors that she had an accident and was terribly disfigured. Some people said that she joined the terrorist group Arachnos.

But then she appeared in the tabloid radar again, this time as an executive for LexieTech Incorporated. The social circles rejoiced. Kimaliya Wolfe had finally "cleaned up".

But as with all things related to celebrities... even this is just skin-deep.

There is some speculation about whether or not Kimaliya is an operative of Arachnos. If that's the case, then the speculation would be that she'd be a Widow, which would give her access to hidden blades and toxins. Perfect for a seductress or a celebutant looking for the means to defend herself in a place like the Rogue Isles.

What most people do not know is that Kimaliya has a masters degree in business management, and has even created and perfected her own method of gauging public attention known as the "Popularity Index". This has been very useful in her work with LexieTech in being able to measure the appeal of products and people.

Kimaliya may appear to be spoiled, shallow, and superficial, but underneath that busty exterior is a carefully calculating businesswoman. One that is smart enough to engineer her own method of gauging public attention. Everything she does is designed to further her own image and her business influence.

Kimaliya Wolfe was mentioned in "Tales From Paragon City" #1 but was not seen until "Furia and the Guardians" #10.

According to the character's creator, she is based on several real-world "celebutants", including but not limited to several members of the Kardashian family.