How To: Create A Comic/Part 1: Introduction 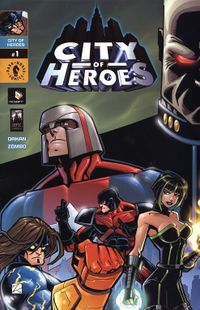 The City of Heroes one-shot special from Dark Horse Comics.

A comic book is really nothing more than a graphical form of a literary story which uses images in lieu of text. Instead of talking about a character walking down a street, you show the character doing it. Instead of describing how beautiful a scene is, you actually show the scene and let the reader declare it so.

That is the purpose of a comic book. It uses images to help tell the story.

Prior to the age of personal computers and the Internet, good comic books were a combination of artistic talent and creative writing, and it was rare to find both in the same person. This is why comics were considered a team operation, and you’d hear of great partnerships such as Jerry Siegel and Joe Schuster, Stan Lee and Jack Kirby, Alan Moore and Dave Gibbons, and Alex Ross and Mark Waid.

Even today, traditional comic books are created as a team effort, with each group playing a part in having a script written, panels drawn, images inked and colored, text and speech balloons added, a cover designed, and then have everything printed, boxed, and then shipped to distributors to sell in stores. And this is done every month, with the end of one story being the start of the next.

For explanation purposes, we’re going to operate on the presumption that you’d like to create a comic book based on the City of Heroes Massive Multiplayer Online Role-Playing Game. This will save us the time from having to specify in every instance which source material you would be using to create your comic. It also doesn’t matter if you’re creating a comic strip, a comic page, or a whole comic book; the process would still be the same.