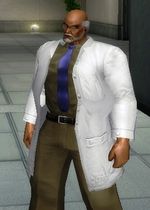 Doctor Devon "Dev" Ellison is a genetic specialist. He appears in Issue #16 of the Guardians of the Dawn Spotlight series and is considered a physical guise for Omega Shift.

As a young child, Devon Ellison lost his little brother to a malformed heart. When he asked his parents what happened, they told him that his brother's heart just wasn't right and that sometimes these things happen to people.

He believed that there should be more than that, and thus he made it his life's work to figure out why some people are born with defects and others are born with "gifts" of nature.

He applied himself in school, dedicating his life to studying everything he could on the human anatomy and the early genetic research of the time. This was aided in part by his stress-related bouts of insomnia. He got his PhD in medicine and after his internship he focused on specializing in birth defects, discovering that birth defects themselves were another form of genetic mutation, which he referred to as a "maltation".

When the scientific community announced they would be launching the Human Genome Exploration Project, Ellison's name was at the top of the list of people needed for the research. It was here that he met a fellow genetic researcher named Dr. Len Zarus. The two became friends, and eventually shared the stage with the rest of the fifty-man project when they won the Nobel Award for Science after successfully mapping the human and mutant genetic structures.

Ellison stayed in touch with Zarus afterward, often serving as a sounding board for Zarus, who also suffered from insomnia. It was understandable, then, that when Zarus began his dream project, the Omega-Genesis Program, Ellison would be the first person he would ask to be a part of.

Ellison served as the voice of reason for the program's investors. His calming voice often assured investors that the project would meet all expectations in an ethical way, which was essential given the circumstances surrounding Zarus' previous dismissal from Crey Industries.

Unfortunately Ellison's efforts were focused on just one portion of the program, namely the viability of artificially creating a human life. Zarus kept him in the dark about the problems with the investors, or with the lack of material to work with, or with the second half of the project's goals, which was a way to imprint new creations with already-established knowledge.

It was only when Ellison discovered new genetic material that had been treated for flesh-eating bacteria did he suspect that something was wrong. Much to his shock, he discovered that his friend had struck a deal with Doctor Vahzilok and his patchwork minions to supply fresh material. Vahzilok also provided Zarus with a device they stole from Crey Industries that would encode a person's memories and personality into their blood, which would be then removed. Ellison knew of the device, but believed that Zarus would never use it, since the encoding and extraction of the blood would kill the subject.

Zarus, however, had no qualms on using it, especially after the program's investors started abandoning the program. Zarus believed he needed a library of genetic templates for his project to succeed. Since most of the physical creation had already been achieved, Zarus decided that his friend would be the first "donor" to the "Genetic Template Database". Despite Ellison's pleas for mercy, he was subjected to the device and was killed.

Ellison's essence became part of the "Genetic Template Database" (or "GTD") along with all of the others that would later be subjected to the machine and killed. This database would then be imposed, en masse, into the nineteen subjects in an emergency activation protocol initiated by Zarus when Freedom Corps raided the facility.

Of the nineteen potential subject, only one survived. That young female would take the name May Shift and would later call herself Omega Shift.

At first Omega Shift was considered a mental blank slate, learning things gradually through trial-and-error. But eventually as the GTD began to take hold, she suddenly developed a genius-level intelligence. Since the device stolen from Crey involved Rikti technology, authority over the device went to the United Nations security division otherwise known as the Vanguard. It was there that Vanguard scientists discovered that Omega Shift carried all of the GTD in her body, and that by focusing on one of the myriad of personalities, she could physically become that person.

Thus when she accessed Ellison's personality, she physically and mentally became Dev Ellison. Unfortunately when she changed back, her mind was then flooded with the memories of his betrayal and painful death. The traumatic memory was enough for her to collapse in pain and sorrow. Later, however, she found out that she could still tap portions of his knowledge without having to revert into his form.

Since Ellison had no surviving family, Vanguard allowed Omega Shift to retain this part of Ellison, officially declaring him to be "on retainer" with the Vanguard office in Geneva. This allows her to continue to use his knowledge and personality, and even his form on occasion, although she would prefer not to unless absolutely necessary, since his death was the most traumatic one of all for her to endure.

Dr. Ellison first appeared in Issue #16 of "Guardians of the Dawn Spotlight" and was later instrumental in saving Galatea Powers' life during the "Galatea Dawning" storyline.