"I am the one person in your life that you do not ever want to cross. I can either be your best friend or your worst enemy. The choice is entirely up to you. If you're honest with me, then I can be the best friend you can ever have in U.N.T.I.L., and that can open up a lot of doors for you if you are a hero. But, if you lie to me, if you try to undercut what I do, then I will be the worst person that you will ever come across in your whole life."
- Major Xavier Cross 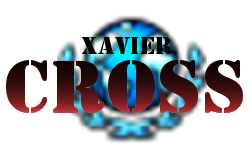 Xavier Cross is a character in the world of Champions Online MMO and an officer in the United Nations Tribunal on International Law.

A native of Detroit, Xavier Cross was raised by his grandmother following the tragic death of his parents. When his older brother was gunned down in a gang-related shooting, his grandmother and police were determined to make sure Xavier did not fall down the same path.

He joined the United States Army after he graduated from high school. For the most part it was uneventful. But then during a joint US-UN mission (the details of which are still CLASSIFIED), he was attacked by mystical forces and found himself surrounded by fire.

When he awoke, he discovered that the fire ignited a dormant mutant power inside of him, which gave him pyrokinetic abilities. He was immediately transferred to U.N.T.I.L. to better harness his abilities.

His training was difficult; even worse than Boot Camp. Some people believed that it was because of the instructors. But others think that it had to do with his action in that one mission that sparked his abilities.

Cross quickly rose in the ranks. After the Battle of Detroit, which destroyed his home neighborhood, he was given an officer's commission and assigned to help secure the destroyed areas from looters. This is where he developed his reputation for being a hard-ass, especially when it came to scavenger groups trying to pick destroyed neighborhoods clean of valuables and copper.

Once the area that was Detroit became known as Millennium City, Cross began working with other U.N.T.I.L. divisions that needed help. It became obvious that Cross needed a project all his own, but they lacked the kind of project that he would be suited for. To that end, he was placed in a "floating" position, able to go to various divisions when needed or requested.

Following the death of the former hero known as Foreclosure, Cross pulled strings to be given the case to investigate his strange actions leading to his death at the hands of Galatea Future. After some initial research, he formally requested the launch of his own U.N.T.I.L. program known as Project Mycroft.

The details of this program are still classified.

Xavier Cross was born with a mutation that manifested during a mystical attack. This gives him pyrokinetic abilities, which allow him to project fireballs on an enemy. He can also radiate fire for both offensive and defensive means.

But he doesn't like using his physical abilities unless he can help it. He would much rather use the force of his character to motivate others.

In addition to his physical power, he also is a highly-skilled U.N.T.I.L. officer, trained in hand-to-hand combat and all the latest technological devices available to U.N.T.I.L.. For a while, he has used a jet pack to travel, but in recent years he's been issued an UNTIL armored shuttle for his own use.

His appearance is influenced by several characters, including Roland Cox (the "Paladin" from the movie "Jumper" and played by Samuel L. Jackson), Colonel Roy Mustang (from "Full Metal Alchemist"), and, of course, SHIELD Director Nick Fury (not only played by Samuel L. Jackson in the Marvel movies but also the Marvel Ultimates character himself was based on Mr. Jackson).